The BTS member, Jungkook dropped his selfie, and his charming look has ARMYs heart. He is nailing it with blonde hair and endearing pout. The latest Insta picture of the K-Pop singer is too hot to handle, and followers cannot stop gushing. 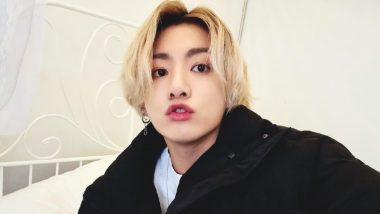 The Bangtan Boys, aka BTS, continue to rule hearts! There is hardly any day when they won’t make it to the headlines. Not only their music skills, but credits go to their fandom, ARMY who ensures their favourite K-Pop singers remain on the top spot. At the 2021 Golden Disc Awards, Joe Jungkook debuted in blonde hair, and it is the singer’s look that is making fans go bonkers. Now, the BTS member dropped his selfie on social media, and his charming look has ARMYs heart. He is nailing it with blonde hair and endearing pout. The latest picture of the K-Pop singer is too hot to handle, and followers cannot stop gushing.

Each of the BTS members enjoys some massive fan followers. Jungkook’s fashion and hairstyle have always impressed the ARMY. The youngest member of the South Korean boy band always manages to steal the attention. There is a reason that he was declared as the ‘Sexiest International Alive 2020,’ by People’s Magazine. When he debuted his blonde hair at the Golden Disc Awards, fans were stunned. The Golden Maknae looked surreal. His blonde hair instantly became a trending topic on Twitter, even more than the award show.

Ever since then, ARMY has been yearning Jungkook to drop a selca showing off his new hair colour. So, when he shared a selfie, his pic was quick to go viral on all the social media platforms. Chilling on a bed, Jungkook’s blonde hair is stealing the spotlight, and Kookie even manages to make the most adorable pout face, and you cannot miss it.

Jungkook is now the only person in Twitter’s history to have two tweets surpassing 500K comments.@BTS_twt #JUNGKOOK #정국 #JK pic.twitter.com/g4dgtv4AbP

All Thanks to His Hair Style

‘jungkook’ is still trending at #1 worldwide 🌏 and #2 in the United States 🇺🇸 with over 1.21 million tweets pic.twitter.com/sLsfZEmT9g

ARMYs Go Far and Beyond!

jungkook makes me so happy, i can’t explain the way he makes me feel, every little thing about him is so beautiful, unique, charming, cute and he is so so amazing, he’s the embodiment of happiness & love :(

Holy Smoke! Jungkook really dominating the worldwide trends. Look at the number of tweets OMG 🥺🤭 We surely missed him didn’t we pic.twitter.com/QZFaofycPP

The selfie was surely more than enough to leave ARMY gasping because of the maknae. It has been a while since the K-Pop singer experimented with his look. The last time he opted for blonde hair colour was during their Bon Voyage—Malta trip. The hairstyle indeed suits him, and K-Pop fans are loving it!

(The above story first appeared on LatestLY on Jan 25, 2021 11:52 AM IST. For more news and updates on politics, world, sports, entertainment and lifestyle, log on to our website latestly.com).