Prime Minister Narendra Modi did a virtual address at the inauguration of Bengaluru Tech Summit 2020. All the updates from the events were tweeted with #PMModiAtBTS2020. And fans of the K-Pop boy band BTS took over the hashtag thinking it was to do with their favourite South Korean band. They promoted BTS 'BE' album. 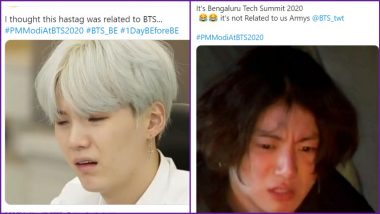 Prime Minister Narendra Modi did a virtual address at the inauguration of Bengaluru Tech Summit 2020. All the updates from the events were tweeted with #PMModiAtBTS2020. But fans of the K-Pop boy band BTS who have a great presence on social media platforms, took over the hashtag thinking it was to do with their favourite South Korean band. The K-Pop boy band is releasing their second album called 'BE' today and BTS Army, as the fans call themselves, have been eagerly waiting for the release. The lead song video "Life Goes On" has been released and garnered over a million likes already. A lot of die-hard BTS fans thought the boy band would be coming to India or an interaction with PM Modi and so on. Turns out, BTS in the trending hashtag was for Bengaluru Tech Summit 2020. However, it was soon dominated with a lot of BTS boy band fans tweets.

On November 19, Indian Prime Minister Narendra Modi inaugurated the Bengaluru Tech Summit 2020 via video conferencing. During the event, all the updates were shared on social media platforms with the hashtag #PMModiAtBTS2020. Meanwhile, the K-pop fans were thrilled and wondered if BTS have a tour to India or what's the connection with the Indian PM. Soon, as everyone got tweeting, the hashtag was in a way taken over by the BTS Army gang expressing their excitement at the boy band's upcoming album. When they realised what it actually stood for, there were funny reactions and jokes too. BTS Music Video Dynamite Crosses 600 Million Views on YouTube, BTS Army Cannot Stop Gushing Over K-Pop Boy Band With Congratulatory Messages.

Yo i thought our PM Modi gonna do a special meeting for BE i thought BTS gonna come to India 😭😭😭#PMModiAtBTS2020 pic.twitter.com/7TGIKBLIxE

i thought it was about BTS😭

i further thought before clicking that, PM modi would call BTS here for a concert like the prince of Saudi Arabia did😭😭💜

even though im tweeting this..... pic.twitter.com/mBt5knQMSf

I just woke up and thought it was related to our boys and they will come to our country , what a wonderful life.... pic.twitter.com/HyooD1Eg5N

Not Related to BTS

Me after see this hastage. Me after

At the early start of this month, the boy band unveiled the list of songs in their upcoming album BE which released today. The album has eight songs and fans are already excited to hear them all, hoping to make records with this one as well. Their lead song "Life Goes On" premiered today and fans are already loving it.

Check The Song Life Goes on by BTS:

The wait is over for BTS fans as the lead song is here and Army is set to make records for this one. Some of them joked about misunderstanding of the hashtag but everything works in their favour as long as they are promoting their favourite Bangtan group.

(The above story first appeared on LatestLY on Nov 20, 2020 01:15 PM IST. For more news and updates on politics, world, sports, entertainment and lifestyle, log on to our website latestly.com).