K-pop stars BTS have revealed the lead single, Life goes on, from their upcoming album. The album "BE" (Deluxe Edition) is slated to come out on November 20. 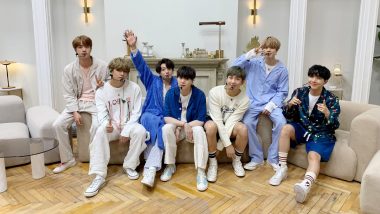 K-pop stars BTS have revealed the lead single, Life goes on, from their upcoming album. The album "BE" (Deluxe Edition) is slated to come out on November 20. Amidst the pandemic when people are adjusting to the new normal, the album comes with a message that says: "Even in the face of this new normality, our life goes on." BTS: Members, Net Worth, Facts – All You Need To Know About the Most Popular K-Pop Boy Band In the World

"BE" (Deluxe Edition) reflects the thoughts and emotions of the band members, which comprises Jung Kook, RM, Jimin, V, J-Hope, Jin and Suga, who have been actively involved in all aspects of the creative process for this album. BTS Band Member Jimin Breaks Down COVID-19 Rules For Kids, WHO Boss Tedros Adhanom Ghebreyesus Approves (Watch Video)

BTS will perform "Life goes on" for the first time at the 2020 American Music Awards on November 22. The announcement comes after their virtual concert "Map Of The Soul ON:E", which was live streamed on October 10 and October 11. The group was thankful for technology that helped them connect with their fans, fondly called the Army.

(The above story first appeared on LatestLY on Oct 31, 2020 11:25 PM IST. For more news and updates on politics, world, sports, entertainment and lifestyle, log on to our website latestly.com).