BTS V aka Kim Taehyung Deleted Instagram Stories Are HERE! Check Pics and Videos of Tae Tae That Will Definitely Perk Up Your Mood

BTS' vocalist V aka Kim Taehyung may be a force to be reckoned with on stage, but he is equally impressive off it too. Talk about a hot yet cute man and V would definitely come to mind. But Taehyung often deletes his photos just a few minutes after posting them. If you have missed any of his adorable stories, then scroll down quickly. 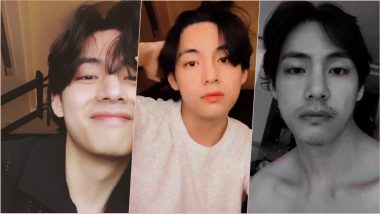 From music to fashion well-known K-pop boy band BTS is leading the charge in every industry that they dabble in. Moreover, ever since the Bangtan boys made their individual Instagram handles, ARMY has gone bonkers. But when it comes to V's updates, we have often noticed that his stories disappear before the 24-hour mark. He later revealed the true reason behind him deleting the stories on the fanbase platform Weverse. He said that "I also don’t want to delete it but when I enter the story section, I feel like changing [old stories] into something new. There’s nothing new to upload.. So since the delete button is there, I delete it". Well, it's just another Tae Tae thing! BTS V aka Kim Taehyung News ICYMI: From Cooking Ramen to Growing Moustache & Beard, 5 Hottest News Around Tae Tae That’re Breaking the Internet!

Nevertheless, the wind prince always gave us major style envy with unique fashion avatars. Kim enjoys 35.2 million followers on Instagram and has already broken many records in the past when it comes to his official IG account. Tae Tae showcased his insta dominance by racking up 30 million followers in mere 27 days. Furthermore, if you are a genuine Kim Taehyung fan then you would have an idea about how much he adores his furry friend, Yeontan. The winter bear singer frequently drops stories and updates with his pet dog. You just never know what picture or to be a precise 'trend', you will see next from V. To liven up your mood, we have brought to you a Kim Taehyung special thread. Here are the best stories that V decided to delete but will always stick in your memory because they are too cute to handle. ‘Congratulations Kim Taehyung’ Says BTS ARMY After V Bags Guinness World Records (Check Best Tweets).

As Cute As A Bug's Ear

this was iconic tho 😔 pic.twitter.com/VFfHwFQJdu

my icloud deleted almost everything on my phone good thing my aunt sent this to me pic.twitter.com/GeW80ugCMR

Kim With His Furry Pet, Yeontan

How Could He Even Think About Deleting Such A Cute Video?

Check Out The The Whole Thread Of Deleted Instagram Stories Here

— a thread that everyone needs

V knows what his favourite people, ARMY, would like and he treat his fandom accordingly by posting adorable snaps and video clips. At this point, it cannot be denied that Kim Taehyung, aka V of BTS, is one of the most stylish men in the entire world.

(The above story first appeared on LatestLY on Feb 23, 2022 03:48 PM IST. For more news and updates on politics, world, sports, entertainment and lifestyle, log on to our website latestly.com).