Kim Taehyung had had quite an eventful December so far. He broke several Instagram records to bag two Guinness World Records titles. Let us break it down for you guys, in case you missed out on any of Kim Taehyung's news. Because, boy, oh, boy, he seems to be in a mood to rule the world. 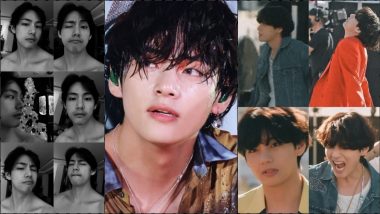 Guess who is making the most of his birthday month? Yes, it is none other than our Tae Bear. Yes, we mean Kim Taehyung aka V of BTS. The 25-year-old K-pop idol has been breaking the internet with his acts and antics, more so since joining Instagram earlier this month. V is blessing millions of ARMYs' timelines with his thirst traps, beautiful selcas (selfies), never-ending fun and thoughtful conversations with fans on Weverse. Lately, fans saw V flaunt his facial hair (yes, Tae Tae is growing moustache and beard) in one of the now-deleted IG stories. He also bowled over the LA crowd and fans worldwide with his charming self during the 'Crosswalk Concert' on The Late Late Show with James Corden. The baritone legend also got fans excited after the release date of his new song "Christmas Tree" was announced. Like Judy had said, "that's a lot of information to get in 30 seconds." 8 Times BTS V aka Kim Taehyung Stole The Show During Crosswalk Concert on The Late Late Show With James Corden (Watch Videos).

Let us break it down for you guys, in case you missed out on any of Kim Taehyung's news. Because, boy, oh, boy, he seems to be in a mood to rule the world.

Kim Taehyung has found a liking for facial hair and posting thirst traps! After discussing about growing beard with fans on Weverse, which sparked Taechwita meme-fest, the "Permission to Dance" singer gave his Instagram followers a sneak peek of what's coming! In a now-deleted IG story, he shared a shirtless thirst trap flaunting his growing moustache and beard. But it did not stop the clip from going viral. One can also see a beautifully-decorated Christmas Tree in the background.

KIM TAEHYUNG, WHAT THE FUCK?? NOT TAE GOING HALF NAKED AND MAKING RAMEN?? THE BEARDS ON HIS FACE?? I’M SCREAMING.pic.twitter.com/qeTtF0URLI

SHIRTLESS KIM TAEHYUNG WITH A SLIGHT MUSTACHE AND A BEARD! WTF pic.twitter.com/MD9Ym26AqV

The handsome vocalist had also shared a second story, showing off his ramen-cooking skills!

The only men that are hot and spicy and won't disappoint you ARE ramen & KIM TAEHYUNG... pic.twitter.com/HE79OPELGy

He is not only making hearts flutter but also solving matters of the heart. Kim Taehyung, who connects with his fans time and again on Weverse turned into a friend-in-need for a distressed ARMY contemplating breaking up with her boyfriend. As translated by BTS fan account @btstranslation7, she asked, "I feel like my bf doesn't really like me.. should we break up? I like him so much, I think about him all day." This is what V responded, "If you still have feelings for him, isn't it worth trying till the end? Think about how you feel," he said, before drawing a parallel with food, "I'm done eating, so I don't have lingering regrets for my food." Don't we love people who use food to explain complex issues? Just nth reason to love V!

taehyung: if you still have feelings for him, isn’t it worth trying till the end?

think about how you feel.

i’m done eating, so i don’t have lingering regrets for my food pic.twitter.com/ptVUkpPKQO

Kim Taehyung is quite candid with his fans during Weverse session, and he updated them about learning English. Several fans took to social media to share screenshots of the chat, where BTS vocalist informed about learning the language, though admitting "English to be hard." Nevertheless, fans were flooded with his heartwarming gesture.

Kim Taehyung came on Weverse and replied to lots of ARMYs post, he said he's learning English, recommend some Jazz songs, saying all BTS members keep in contact for 24 hrs and promised to give an ARMY signed album and take more taekook selca! He's so cute! Taetae so precious 💜 pic.twitter.com/IvTirHsDdc

4. Stealing The Show at 'Crosswalk Concert'

While V might find learning the language difficult, he left everyone speechless with his spoken English on recently-aired BTS' 'Crosswalk Concert' on The Late Late Show With James Corden. Kim Taehyung was the cynosure of all eyes right from the word go. Fans are listening to V's dialogue to Corden "James, that is not a venue, that is a crosswalk" on a loop. Uhh, his deep, heavenly voice is so soothing.

Watch Video: BTS Performs a Concert in the Crosswalk

Speaking of his baritone voice, brace yourselves to be blown away by V's new song "Christmas Tree." Yes, the release date of V's OST from Our Beloved Summer is out. It will release on Christmas eve.

(The above story first appeared on LatestLY on Dec 19, 2021 02:55 PM IST. For more news and updates on politics, world, sports, entertainment and lifestyle, log on to our website latestly.com).