Charlie Chaplin has become the inventor of the distracted boyfriend memes. 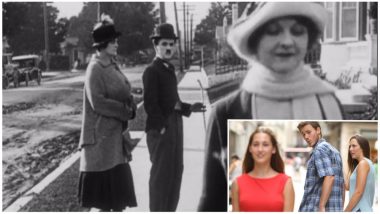 Those who spend too much time online must be well acquainted with the distracted boyfriend memes. Some must have gone ahead and created their own versions and shared it on social media. It is a picture of a guy checking out another woman while his partner looks at him angrily. People out there put some texts on all the three characters, to resemble a better preference over another and shared them widely. The distracted boyfriend memes will still come on your social feed sometimes. But the internet is such a vast place and there is an original finding regarding this viral picture. Charlie Chaplin's scene from the silent film Pay Day had the exact similar scene, with Chaplin being the distracted one.

Someone put up a picture of the scene wherein Charlie Chaplin is walking with his girl and turns back to check another woman, while his girl looks angrily at him. And it doesn't take long for the meme crazy ones to spot the similarity. So soon everyone went gaga over Charlie Chaplin being the original inventor or him being the 'real' distracted boyfriend and not the one in the checked blue shirt.

Take a look at the picture of Charlie Chaplin resembling the distracted boyfriend:

I'm very sorry for this, but... pic.twitter.com/iewtkmUmkG

And soon three were memes created on Charlie Chaplin's picture as well. Check some of them:

Face replacement with the new characters

Turns out Charlie Chaplin is the godfather of memes. pic.twitter.com/hdtZHMmwVT

In the coming few days we may get to see more of these memes. The image was reversed to make it more similar to the current format and soon all the distracted boyfriend memes will be made into the one with Charlie Chaplin, can we say. So if you would have thought the meme format was just disappearing then here we have the origin back for the meme makers out there. This one has just evolved but back in time.

(The above story first appeared on LatestLY on Jun 13, 2018 04:59 PM IST. For more news and updates on politics, world, sports, entertainment and lifestyle, log on to our website latestly.com).