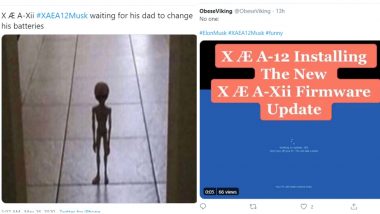 When Elon Musk shared a picture of his newborn baby boy, people were more perplexed than adored by the child's name. Musk revealed his son's name was X Æ A-12 and people spent days figuring out how to pronounce it even. The weird choice of the name including special characters and numbers became a target of so many hilarious memes. And while many wondered if that would be the real name, there's been a change due to the Californian law, although not a major one. Elon Musk and Grimes have changed their son's name to X Æ A-Xii to abide by the California law. However, the change of numerals to roman letters has once again been the target of funny memes and jokes on Twitter.

As per the Californian law, names must be written on birth certificates 'using the 26 alphabetical letters of the English language' although apostrophes and dashes can be included. Now to substitute the numerals, the couple changed 12 to ii. So the pronunciation 'Ex Ash A Twelve' remains the same. The minor change in the name has evoked more funny memes, with people calling it just a software update. X Æ A-12 Musk Meaning & Pronunciation Revealed! Elon Musk Answers Most-Asked Questions About His Newborn Son's Name (Watch Video).

*then he realizes they changed it to: X Æ A-XII: #ElonMusk #XAEA12Musk pic.twitter.com/PHhhHIjmH5

Elon's child been bullied before he was born lmao #XAEA12 #XAEAXii

X Æ A-Xii #XAEA12Musk waiting for his dad to change his batteries pic.twitter.com/1mgRifID1U

For those who are still unaware of what the unusual name means, The X stands for the unknown variable, Æ, my elven spelling of Ai (love &/or Artificial intelligence), A-12 for Archangel 12 their favourite aircraft. Quiet the way to include so many things in one, right? Now the 12 will be denoted with ii, roman letters.

(The above story first appeared on LatestLY on May 26, 2020 09:53 AM IST. For more news and updates on politics, world, sports, entertainment and lifestyle, log on to our website latestly.com).