'Crowd Singing Vande Mataram After Team India's Historic Win Against Australia in Gabba' Video is Old; Here's The Truth Behind The Viral Video

Recently, a video of Indian fans singing "Vande Mataram" during a cricket match is going viral on social media after India's victory in the 4th test match against Australia in the Border-Gavaskar trophy. However, the video is two years old. 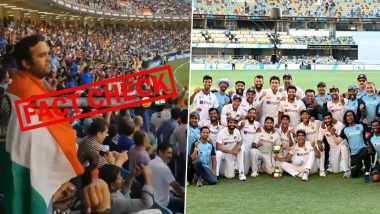 Mumbai, January 22: Recently, a video of Indian fans singing "Vande Mataram" during a cricket match is going viral on social media after India's victory in the 4th test match against Australia in the Border-Gavaskar trophy. The video is being shared with a claim that Indian fans sang "Vande Matram" during the match in Gabba. ICC World Test Championship 2019–21 Points Table Updated: India Regain Top Position After Historic Triumph at The Gabba, Australia Slip Down to Third Spot.

However, the video was almost two years old. In the video clip, it could be seen that cricket fans are waving the tricolour and singing 'Vande Mataram' to cheer the Indian Cricket team. According to online portal Boomlive, the video was shot during the India-Pakistan match which was played in Dubai Cricket Stadium on September 24, 2018. Rishabh Pant Leads Team India's Victory March With National Flag At The Gabba Following Test Series Win Over Australia (Watch Video).

The video is also uploaded on Youtube in 2018. The description of the viral clip reads, "Thousands of Indians Singing in Unity in Dubai Cricket Stadium. The match was held between the two arch-rivals s part of the Asia Cup, 2018.

Team India created history at the Gabba on Tuesday as they handed Australia the first defeat at the venue since 1988. With this win, India sealed the Border-Gavaskar trophy as they secured the series 2-1. Rishabh Pant, Shubhman Gill, Cheteshwar Pujara, Mohammed Siraj and Shardul Thakur performed brilliantly in the match.

Crowd singing Vande Mataram during the 4th test match between India vs Australia.

The video is old. Crowd sang Vande Mataram during India vs Pakistan ODI as part of Asia Cup in Dubai.

(The above story first appeared on LatestLY on Jan 22, 2021 06:33 PM IST. For more news and updates on politics, world, sports, entertainment and lifestyle, log on to our website latestly.com).