Congress to Get New Party President by June 2021, Elections For The Post After Assembly Polls in Five States

The Congress Working Committee (CWC) on Friday decided to conduct the internal elections for the post of party’s president in May 2021. General Secretary of All India Congress Committee KC Venugopal confirmed the development during a press conference. 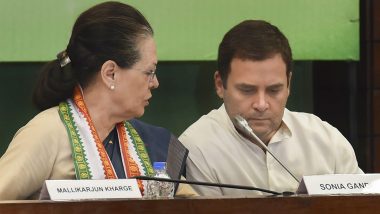 New Delhi, January 22: The Congress Working Committee (CWC) on Friday decided to conduct the internal elections for the post of party’s president in May 2021. General Secretary of All India Congress Committee KC Venugopal confirmed the development during a press conference. He said that party would get new president by June 2021. Party spokesperson Randeep Surjewala was also present at the press conference. Rahul Gandhi to Return as Congress President? Congress Leader Hints 'Comeback' Amidst Solidarity Exercise in Party.

Notably, the Congress president will be elections after elections in five states which are due by May this year. The states where the elections will take place are - West Bengal, Tamil Nadu, Assam, Kerala and Puducherry. The elections for the post of Congress president was due in August last year. Rahul Gandhi Did Not Make 'Collusion With BJP' Remark at CWC Meet, Says Congress; Kapil Sibal Deletes His Tweet Criticising Wayanad MP.

According to a report published in NDTV, during the CWC meeting, senior leaders, including Ghulam Nabi Azad, Anand Sharma, Mukul Wasnik and P Chidambaram asked for immediate organisational polls. These are the leader, who had raised questions on the party’s leadership after defeats in state elections. However, leaders, including Ashok Gehlot, Amarinder Singh, AK Antony and Tariq Anwar favoured for the Congress president elections after the election in five states.

At present, Sonia Gandhi is the interim president of the grand old party. She took over the charge in 2019 as Rahul Gandhi resigned from the post after the debacle of the Congress in the Lok Sabha elections. In August last year, she was again handed over the reins of the grand old party during the CWC meet till elections for the next party president.

(The above story first appeared on LatestLY on Jan 22, 2021 04:05 PM IST. For more news and updates on politics, world, sports, entertainment and lifestyle, log on to our website latestly.com).