Fact Check: Did IISc and ISRO Scientists Make Space Bricks With Urine For Buildings on Moon? Know Truth About The Viral News Report 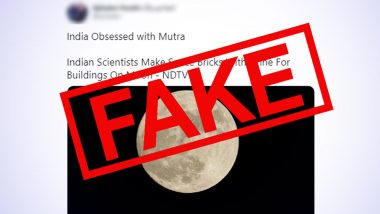 An exploration into space, reaching for the Moon and Mars has grown extensively in the recent past. Every new finding is important to explore into life outside the planet or if humans can do actually settle onto other planets one day. Amid this, a team of Indian researchers developed space bricks that can be used for making structures on the lunar surface! The big news of a breakthrough, however, met with disgust when an NDTV report made a glaring typo of writing urine instead of urea! Although they have deleted it and made the change from urine to urea, Twitterati started mocking the research for using urine until a scientist had to give out clarification about the same. World’s First Bio-Brick Made Out of Human Urine by a Group of South African Students.

A team of researchers from the Indian Institute of Science (IISc) and the Indian Space Research Organisation used bacteria and gaur beans to consolidate soil into load-bearing structures. For the process, they used urea which can be sourced from human urine and lunar soil as raw materials for the construction on the moon’s surface. This would also reduce expenditure considerably. But this research got mocked when urea was written as urine by an NDTV report, which has now been corrected. Netizens made fun of the research without understanding the entire report. Urine Therapy for Weight Loss! Canadian Woman Claims She Lost 60 Kg by Drinking Her Own Pee (Watch Video).

So, if you want lot’s of space bricks fast...send kegs of beer to the Moon for the astronauts 😂

This is when scientist Aloke Kumar, Assistant Professor in the Department of Mechanical Engineering, IISc, stepped in to call out to the misleading headline by the channel. Kumar is one of the authors of the research published.

No Urine was Used

Hello NDTV ! This is our research and urine was not used.

Change your stupid headline and pay your people enough so that they properly read press releases 🤬🤬🤬🤬🤬 https://t.co/ftfX1GXCLS

The research mentions that Urea can be sourced from human urine but it wasn't used in this process. They used a bacterium called Sporosarcina pasteurii that produces calcium carbonate crystals through a metabolic pathway called the ureolytic cycle: it uses urea and calcium to form these crystals as byproducts of the pathway. They used lunar soil, added urea and calcium sources with locally extracted gum to make these bricks. The scientists are further working on enhancing the strength of these space bricks.

It is clear that no human urine but urea was used in the making. However, there is nothing ridiculous about using human urine in scientific experiments. Fertilisers, gardening, agricultural usage for making biogas has been using human urine as well as excreta. It is a part of the scientific method that has been proven effective.

Indian scientists used urine to make bricks for structures on the moon.

Scientists bust the claim and cleared not urine but urea was used in the making process.

(The above story first appeared on LatestLY on Aug 15, 2020 02:33 PM IST. For more news and updates on politics, world, sports, entertainment and lifestyle, log on to our website latestly.com).