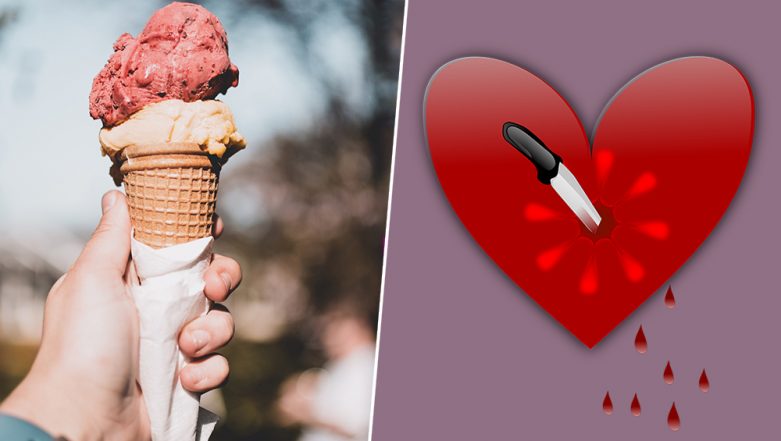 A Chinese girl's anger turned fatal to her boyfriend as he fat-shamed her for eating an ice-cream. The girl allegedly stabbed him with a pair of scissors, so much so, that he lost his life! The guy refused to let her buy an ice-cream, calling her too fat to have one. The couple was walking through the Henan city of Zhumadian where the ghastly incident took place. The paramedics arrived to admit him to a hospital, but he was declared dead enroute. The girl made an attempt to flee but has been arrested. Angry Wife Climbs on Top of Car Roof at Signal in China After Fight With Husband, Watch Viral Video.

As per Shanghaiist, the couple was only in their twenties and had been together for less than a month. The couple was on the Zhumadia street when they got into an argument. According to some eyewitnesses, the argument was regarding an ice-cream. The girl wanted to buy an ice-cream but the boy stopped her telling her, that she was overweight. This fat-shaming remark by the guy led to a fight between the two. The angry girl headed to a nearby shop and bought a pair of scissors.

It is alleged that she stabbed him three to four times with the scissors, which made him lose a lot of blood. The boy fell down on the street and was seriously injured. Paramedics were called in to treat him but it is reported that he passed away on the way to receive any treatment. Meanwhile, the girl tried to make an escape but has been caught. Police are further investigating into the case.

The incident is quite shocking. However, this is also not the first time a girlfriend's angry wrath was seen in China. During the Chinese Valentine's Day, a guy who did not gift his girlfriend a smartphone was slapped by her 52 times in public! A video of this incident had gone viral which showed the angry girlfriend smacking her boyfriend one after another. The police had to intervene to stop the chaos that was taking place. However, in this case, the guy tried to defend his girlfriend.