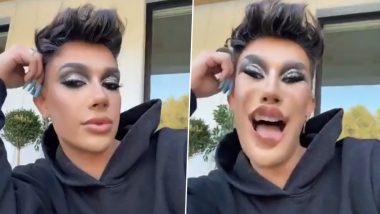 Popular beauty guru, YouTuber James Charles has found himself in a pickle after he made his own version of a viral TikTok trend video wherein he uses filters to make faces with a popular Indian Classical music playing in the background. Netizens are infuriated accusing him of "insulting" classical Indian music. The 13-second clip was tweeted out by the account @monstax4grammys and Twitter is fuming, ever since.  People are slamming James Charles for mocking Indian classical music. However, TBH, it is actually a trend that many others are following and about a week ago a video was going viral made using this same tune in the background, except it featured a cat.

The music includes a popular bit of classical tune pulling high notes, except for this trend people use it to show as if one is screaming in pain. Some even use this music in sync with the filter to make it seem funny.  People were, even more, irked that James Charles laughed in what is being called "derogatory" manner as the tune played and netizens believe it seemed that he was mocking the classical tune. @MONSTAX4GRAMMYS shared the video on Twitter with the caption that read: "James Charles honey you are not the Lata Mangeshkar or Shreya Ghoshal you think you are.." Watch the video for yourself:

James Charles honey you are not the Lata Mangeshkar or Shreya Ghoshal you think you are..pic.twitter.com/cshKFRsdFn

i see a lot non-desis using this audio like this and i really don’t like it :/ pic.twitter.com/E9Zv5a74nM

i see a lot non-desis using this audio like this and i really don’t like it :/ pic.twitter.com/E9Zv5a74nM

I’m so sorry that it is being mocked in this way.... it’s so beautiful & should be respected, this isn’t okay 😔

Also, recently the teaser of YouTuber James Charles and Say So singer-rapper, Doja Cat collaborating together grabbed headlines for being controversial. Ever since James Charles shared a sneak peek of his upcoming collab of some form wit Doja Cat, fans are only worried about their health. While it is not known what the "coming soon" collab is going to be but it has sure given rise to panic amid the fans who are worried that James Charles may contract coronavirus infection from Doja Cat who had recently tested positive with COVID-19.

(The above story first appeared on LatestLY on Aug 10, 2020 04:34 PM IST. For more news and updates on politics, world, sports, entertainment and lifestyle, log on to our website latestly.com).