While the idea of YouTuber James Charles and Say So singer-rapper, Doja Cat collaborating together is no less than a dream come true for fans but looks like they're not ready yet to see the two of them work together. The reason being COVID-19. 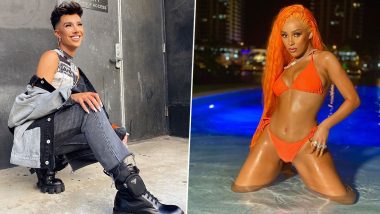 While the idea of YouTuber James Charles and Say So singer-rapper, Doja Cat collaborating together is no less than a dream come true for fans but looks like they're not ready yet to see the two of them work together. The reason being COVID-19. Yes, ever since James Charles has shared a sneak peek of his upcoming collab of some form wit Doja Cat, fans are only worried about their health. While it is not known what the "coming soon" collab is going to be but it has sure given rise to panic amid the fans who are worried that James Charles may contract coronavirus infection from Doja Cat who had recently tested positive with COVID-19.

It all started when Charles shared a teaser of sorts on Instagram Story hinting at a collaboration with Doja Cat on August 1 with a short video.  In the black-and-white video, Charles and Doja Cat could be seen side-by-side on a video camera screen. While some fans were thrilled by the teaser some were left worried because Doja Cat had recently tested positive for the coronavirus. On July 27, Doja Cat had revealed that she contracted coronavirus and noted, "I'm okay now. It was a four-day symptom freakout, but I'm fine now." Although she stated that she is okay netizens believe the two shouldn't collaborate as it is unsafe and there are chances they spread the virus.

Reddit users criticised: "As if he didn't already catch it from one of them Tik Tok parties" and "Anything to keep bringing that YouTube ad money in. Even if it means catching Covid." "pls doja don't do it," says a Twitter user while another writes "majorly disappointed." Recently, James Charles was called out for partying amid coronavirus pandemic. In a party that was attended by who's who from YouTube, Instagram, and TikTok stars without masks at the Hype House while the number was still high in Los Angeles. From Tana Mojeou to James Charles, everyone was called out on social media after some of them actually shared snippets on their social media. However, James Charles and Tana Mongeau, later apologised after being called out by Tyler Oakley.

(The above story first appeared on LatestLY on Aug 02, 2020 06:25 PM IST. For more news and updates on politics, world, sports, entertainment and lifestyle, log on to our website latestly.com).