2020 Eclipses Calendar With Dates and Time: From June 5 Penumbral Lunar Eclipse to Annular Solar Eclipse on June 21, List of Celestial Events to Occur This Year 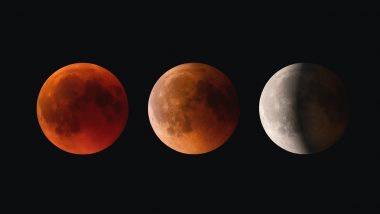 An eclipse takes place when one heavenly body, such as the Moon or planet moves into the shadow of another heavenly body. There are two types of eclipses on Earth—Solar and Lunar Eclipses. Again there different kinds of solar and lunar eclipses. It could be partial, penumbral or total. The sky gazers this year are blessed as a total of six eclipses are scheduled to be held this year. The first one—a penumbral lunar eclipse already took place on January 10 this year, is the first lunar eclipse of 2020 and also the first for this new decade. The next celestial event of penumbral lunar eclipse is scheduled on June 5, followed by an annular solar eclipse on the same month, the penumbral lunar eclipse on July and November, respectively and a total solar eclipse on December, 2020. In this article, we have mentioned 2020 Eclipses calendar with dates for eclipses 2020 and other related details you should know. Penumbral Lunar Eclipse June 2020: Not Only India, Here's List of Countries And Continents Where The Celestial Event of Chandra Grahan Will be Visible.

A penumbral lunar eclipse occurs when the Sun, Earth and the Moon are aligned, imperfectly. When this happens, the Earth blocks some of the Sun’s light from directly reaching the Moon’s surface and also covers all or part of the Moon with the outer part of its shadow. This process is known as the penumbra. The penumbral lunar eclipse on June 5, also known as Strawberry Moon will be visible only from the western Pacific Ocean and parts of Australasia, Asia, Antarctica, Europe, Africa and South America. Timeanddate.com states that the lunar eclipse will begin on June 5 at 11:15 pm IST and will be at its maximum on June 6 at 12:54 am.

(The above story first appeared on LatestLY on Jun 03, 2020 11:05 AM IST. For more news and updates on politics, world, sports, entertainment and lifestyle, log on to our website latestly.com).