K-Pop BTS' 'That Moment' When They Lost Grammys 2021 to Ariana Grande and Lady Gaga Captured in a Video and Now the ARMY Cannot Get Enough of It!

The K-Pop group, BTS may have lost the Grammys BUT surely did win lots of hearts and that is why the reaction of the K-Pop group at the exact moment when they lost the grand award is now going viral! 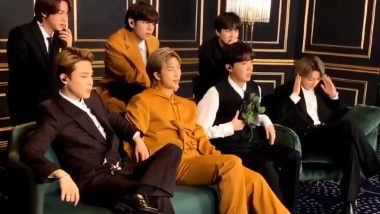 BTS 'Moment' When They Found Out They Lost The Grammys 2021 Video SS (Photo Credits: Twitter)

The K-Pop group, BTS may have lost the Grammys BUT surely did win lots of hearts and that is why the reaction of the K-Pop group at the exact moment when they lost the grand award is now going viral! The Bangtan boys were nominated this year for Best Pop Duo/Group Performance at Grammys 2021 and they also made history by earning Grammys nomination as they became the first-ever K-Pop band to achieve a nomination in a major category.  However, they could not win in that solo category they were nominated in and they lost to Ariana Grande and Lady Gaga’s collaboration Rain On Me. The ARMY didn't hide the feeling well and shared tweets under hashtag #Scammys, The other nominations were: J Balvin, Dua Lipa, Bad Bunny & Tainy's "Un Dia (One Day)," Justin Bieber featuring Quavo's "Intentions" and Taylor Swift featuring Bon Iver's "Exile".

The 63rd Annual Grammy Awards were delayed because of the ongoing COVID-19 pandemic shifting from its original January 31 broadcast to March 14. However, the event was a success. The BTS Army however cannot get enough of the video of the exact moment when the K-Pop group lost the awards.  The boy band took to their official Twitter handle and tweeted their reaction with the caption "that moment" with laughter emoji.

The 63rd Annual Grammy Awards ceremony was held in Los Angeles and witness the attendance of global music stars like Beyonce, Megan Thee Stallion, Harry Styles who even emerged winners in various categories.

The seven-member band  The boy band comprises of seven swoon-worthy bandmates RM, Jin, Suga, J-Hope, Jimin, V, and Jungkook.  performed from South Korea later and won hearts all over again on Twitter with their video going viral. The event was virtual and had Harry Styles and Billie Eilish as part of the opening act. The band had recently topped their first-ever number one hit single on the Billboard charts in the United States with 'Dynamite'  which further received a nod for the best pop duo/ group performance at the 63rd Grammy Awards nominations.

(The above story first appeared on LatestLY on Mar 17, 2021 09:11 AM IST. For more news and updates on politics, world, sports, entertainment and lifestyle, log on to our website latestly.com).