South Korean sensation BTS is one step closer to their dream of winning a Grammy Award as the band has been nominated in the best pop duo/group performance category by the Recording Academy for their chartbuster track "Dynamite". 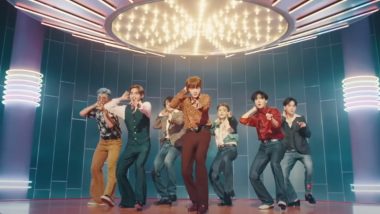 Los Angeles, Nov 24: South Korean sensation BTS is one step closer to their dream of winning a Grammy Award as the band has been nominated in the best pop duo/group performance category by the Recording Academy for their chartbuster track "Dynamite". The nominations for the 63rd Grammy Awards were announced on Tuesday night, according to Recording Academy's official website. Grammy Awards 2021 Full Nominations List: Beyonce, Taylor Swift Get Recognised in Different Categories, BTS Thrilled With their Nomination.

"Dynamite", which released on August 21, is the group's first full-fledged English language single and their career's first Billboard Hot 100 No 1 hit.

BTS, whose full name is Bangtan Sonyeondan (Bulletproof Boy Scouts) or Beyond The Scene as they are known to global audiences, also became the first pop act from South Korea to top the Billboard Hot 100 chart with "Dynamite".

The septet -- comprising RM, Jin, Suga, J-Hope, Jimin, V and Jungkook -- thanked the ARMY, a term for the band's fans, for their support in this journey to earning a Grammy nod. "Thank you to everyone who listened to and sympathized with our music during the difficult times. Above all, it is ARMYs who made the miracle of being a Grammy candidate. We always appreciate and love you. Thank you @RecordingAcad for this great honor!" a tweet on the group's official Twitter account read. AMA 2020 Full Winners' List: BTS, Taylor Swift, The Weeknd, Dan + Shy Win Big at the Musical Night!

BTS has often described "Dynamite" as a song full of zest, positive vibes and dealing with life one step at a time as one feels "heavy" amid the ongoing coronavirus pandemic.

It is also the closing track of their album 'BE', which was launched last Friday.

Apart from 'BE', BTS also released 'Map of the Soul 7' album earlier this year.

Previously, BTS's album 'Love Yourself: Tear' was up for best recording package in 2019, but had they won, the award would have gone to art director HuskyFox. They also made history at last year's ceremony by being the first K-pop group to present an award.

The group made their Grammy debut this year in collaboration with Lil Nas X for a rendition of the American rapper's "Old Town Road".

"Dynamite" will compete with "Un Dia (One Day)" by Jay Balvin, Dua Lipa, Bad Bunny, and Rainy; "Intentions" by Justin Bieber featuring Quavo; "Rain On Me" by Lady Gaga with Ariana Grande; and "Exile" by Taylor Swift featuring Bon Iver.

The awards ceremony, to be held on January 31, will be hosted by daily show presenter Trevor Noah.