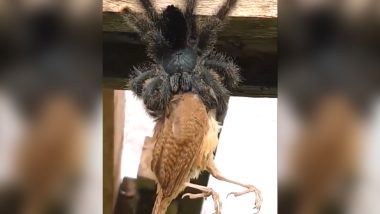 An old video of a big spider eating a bird has gone viral on social media platforms. Well, just like it sounds scary, the video looks terrifying too. The Avicularia can be seen chomping on the bird's head as it hangs helplessly from the spider's clutches. While you may feel terrible for the bird, nobody can alter the law of nature. The video was shared on Twitter with the caption, "An Avicularia munching on a bird." After being posted on September 19, the video has received over 3.5 lakh views and more than 642 likes. Giant 'Hand-Sized' House Spiders Are Invading UK Homes in Search of Sex As Mating Season Begins (View Pics)

It depends on how you see the video as some believe the spider hunted the bird and it has all right to eat its lunch. The spider can be seen slowly munching on the insides of the bird. As the video went viral, people posted their varying opinions on social media platforms. Some said that one should check that there are no not any such spiders around one's house. Deadliest Spiders in the World: New Species of Widow Spider Discovered in South Africa Has Lethal Bite, Watch Video.

An Avicularia munching on a bird. pic.twitter.com/rmwURWD3CP

One of the comments read, "I am just felt pity on the luck of that bird..the whole community of that bird would be ashamed of it." Another Twitter user wrote, "Interesting where it's feeding from. Birds bones are soft & hollow." One of Twitterati wrote, "Oh my god .....prayers for the homeowners where these spiders have made their home."

Those spiders in the corner are growing stronger each day. They're watching you sleep @sarahjmiller89 😲🙄😱

Avicularia is a genus of the family Theraphosidae containing species of tarantulas. The genus is native to tropical South America. Each species in the genus has very distinguishable pink footpads and one of their most notable species is their odd method of defence.

(The above story first appeared on LatestLY on Sep 20, 2020 05:55 PM IST. For more news and updates on politics, world, sports, entertainment and lifestyle, log on to our website latestly.com).