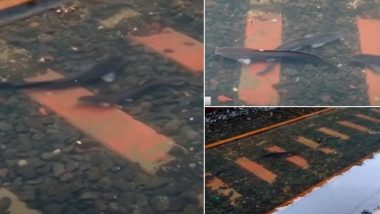 Mumbai, August 4: During the coronavirus lockdown, nature seemed to have healed itself as there is less amount of air and noise pollution. Video of fish swimming at waterlogged railway tracks in Mumbai’s Parel surfaced on social media. On Tuesday, waterlogging was reported on rail tracks following heavy overnight rain. Mumbai Rains: Local Train Services Disrupted, BEST Bus Routes Diverted Due to Severe Waterlogging in Lower Parel And Other Areas.

On the western line, the water level on tracks between Dadar and Prabhadevi reached 200 mm, a Western Railway official said. All lines were affected in this section. Train movement was stopped at Dadar, but suburban services were running between Bandra and Dahanu Road, he said.

The Brihanmumbai Municipal Corporation (BMC) tweeted, “Owing to the heavy rainfall since last night and forecasts of extremely heavy rain by @IndiaMetDep all offices and establishments in Mumbai, except emergency services, will remain shut.” Currently, people involved in providing essential services are allowed to travel by local trains.

(The above story first appeared on LatestLY on Aug 04, 2020 10:03 PM IST. For more news and updates on politics, world, sports, entertainment and lifestyle, log on to our website latestly.com).