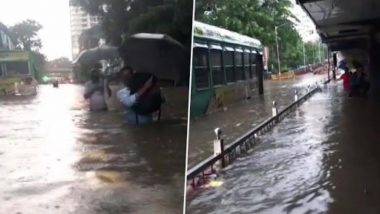 Mumbai, August 4: Overnight heavy rains in the financial capital have led to waterlogging in several places of the financial capital. According to an ANI update, the Western line has been completely stopped and harbour line between Kurla and Chhatrapati Shivaji Maharaj Terminus (CSMT) has been stopped. Trains on the central line are running with slow speed, according to BMC.

BMC further informed that the BEST bus services have been diverted on at least 8 routes in various parts of Mumbai city and suburbs. There has been severe waterlogging in Lower Parel area of Mumbai, causing extreme inconvenience to people on Tuesday morning. High Tide Timing in Mumbai Today: Wave Measuring 4.51 Metres Expected at 12:47 PM Today, Says BMC.

Severe Waterlogging in Lower Parel & Other Areas of Mumbai:

More than 230 mm of rainfall recorded in Mumbai city in the last 10 hours, according to Brihanmumbai Municipal Corporation pic.twitter.com/JVhEWcICvK

BMC has already alerted of a high tide of wave measuring 4.51 metres at 12: 47 pm today. Mumbaikars have been asked to stay away from the shores and waterlogged areas. The city is also placed on red alert and heavy rains are expected to further lash the financial capital today. Apart from Mumbai, the red alert has been issued for Thane, Pune, Raigad and Ratnagiri districts of Maharashtra.

(The above story first appeared on LatestLY on Aug 04, 2020 07:39 AM IST. For more news and updates on politics, world, sports, entertainment and lifestyle, log on to our website latestly.com).