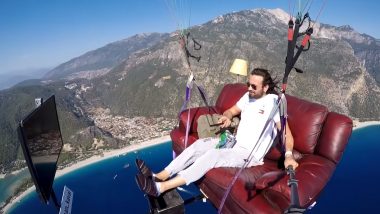 Paragliding comes as part of adventure sport. But can you imagine paragliding on a sofa watching your favourite cartoon? This is no dream but an actual scene of reality achieved by a Turkish paraglider. 29-year-old paragliding instructor Hasan Kaval posted a video of himself paragliding on the couch which has a footstool and TV stand attached to it. And as he soars up in the sky, he is seen eating, drinking and watching Tom and Jerry on TV. He is chilling just like one would at home, but he is soaring up above in the sky. Video of his stunt is going viral on social media and it is crazy, to say the least! ‘Land Kara De’ Viral Video Just Got Its Child Version but the Kid’s Brave Paragliding Act and Cuteness Will Bring a Smile to Your Face.

The entire video is up online in which Kaval first explains what he is about to do. He then makes himself comfortable on a red couch, attached with a harness. His couch has a footstool and then a little ahead protrudes a TV stand, not to forget a little lamp at one of the sides. A parachute is then attached to the couch and he is pushed off the cliff! He begins to soar in the sky with the force of the wind and once in the air, he changes his shoes, gets comfortable, starts munching on chips and watches a bit of Tom and Jerry too! What's scary is he himself does not have a strap or a harness and just holds on to the harness attached to the parachute. Well, don't believe us, watch the video. Video of US Marine Fainting Thrice While Skydiving Goes Viral.

Check the Paragliding on a Couch Video Here:

Crazy, right? Were you feeling scared as he took off his shoes and moved on the couch and he's not even strapped in! The video has been viewed over 6 lakh times and there are some funny comments too. One person wrote, "Come on dude, get up off your couch and do something today. Go outside and get some fresh air at least." Another called it the most comfortable paragliding harness. Another funny response read, "This needed a "Do not try this at home" disclaimer badly." Remember, the old viral video of a guy named Vipin Sahu being so scared while paragliding he just kept on saying, "Land Kara de Bhai". The video inspired so many funny memes and jokes. Hasan Kaval's video is the next level of paragliding one would have ever seen, probably setting goals for some adventure freaks right now!

(The above story first appeared on LatestLY on Jul 07, 2020 05:55 PM IST. For more news and updates on politics, world, sports, entertainment and lifestyle, log on to our website latestly.com).