The man whose paragliding video went viral on social media resulting in hilarious reactions has been identified as 24-year-old Vipin Sahu from Banda in Uttar Pradesh. He had gone with his friends on an 11-day trip to Manali in July this year when the incident happened. 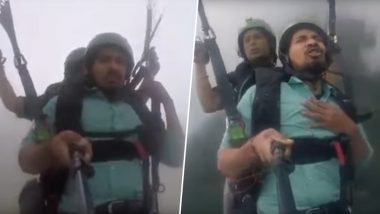 Video of a petrified man praying for his life while paragliding had gone viral on social media last week. The clip was shared widely on the internet as social media users came up with hilarious comments on the footage. His reaction on flying was soon converted into funny memes and GIFs. And as the video continues to be widely shared on social media, the man has been identified as 24-year-old Vipin Sahu from Banda in Uttar Pradesh. Vipin had gone with his friends on an 11-day trip to Manali in July this year where he tried paragliding for the first time. While he is terribly frightened of heights, Vipin agreed to go paragliding after being forced by his friends. And the result is the video which has taken over the internet. And as the video and accompanying memes continue to go viral, Vipin says he now wants to try skydiving! 'Land Kara De Bhai' Funny Paragliding Video Goes Viral; Twitterati Cracks Jokes on Indian Economy.

In the video, Vipin can be heard cursing himself and keeps telling the guide 'land kara de bhai' (I want to land, brother). And social media converted his terrified lines into memes and videos. Talking about the social media fame he has received, Vipin told Outlook India, "Social media is such a powerful thing. A small man from a small town has got so much of love. I am glad I could make so many people laugh." He believes that his Rishabh Dixit posted the video on social media. He says, "He doesn't admit it but I know it's him." Paragliding Memes of 'Land Kara De Bhai' Viral Video Are Too Funny to Be Missed, Check Funniest Tweets and Jokes.

Here is The Paragliding Video of Vipin Sahu That Went Viral:

Vipin says his family has also seen the video. Another element of the video which left the social media laughing is the instructor telling him 'paanv uncha rakh' (keep your legs up). When asked about it, he said that he could not sit properly in the harness because of which he unable to straighten his legs. And as he was inconvenient, he left like slipping down adding to his fear of heights. However, he is now adamant on skydiving which is done using a parachute and which is from greater heights than paragliding.

(The above story first appeared on LatestLY on Aug 28, 2019 01:46 PM IST. For more news and updates on politics, world, sports, entertainment and lifestyle, log on to our website latestly.com).