Young US Marine Erin Adame wanted to get rid of his phobia with heights and decided to make an attempt at skydiving. But it failed so miserably that he almost fainted thrice on his ride. The entire footage of his terrifying expressions while diving was shared online and is now going viral. 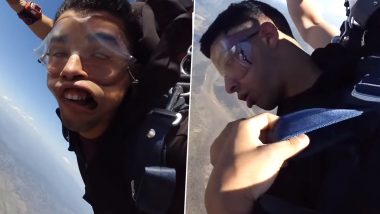 A few days ago, a very funny video of a scared man paragliding in India was shared on the internet and went crazy viral. The "Land Kara De Bhai" video amused so many people that it became a great content for funny memes and jokes. If you are already bored of the paragliding video and its memes, there is a new video of a scared skydiving US Marine, which is going viral. The young US Marine Erin Adame wanted to get rid of his phobia of heights and decided to make an attempt at skydiving. But it failed so miserably that he almost fainted thrice on his ride. The entire footage of his terrifying expressions while diving was shared online and is now going viral. Paragliding Memes of 'Land Kara De Bhai' Viral Video Are Too Funny to Be Missed, Check Funniest Tweets and Jokes.

Adame is a 23-year-old US Marine who has a phobia of heights. And for the same reason, he hasn't even ridden on a roller coaster yet. In order to deal with this fear once and for all, he decided to take tandem skydiving! However, his attempt, while it was terrifying for him, proved to be funny for the internet. His fear can be seen from the moment he jumped down. His eyes rolled up and down, and he even fainted thrice during the course of his ride. The video came up on YouTube recently and is going viral ever since.

Eriq Adame jumped at Jamul, California at 12,500 feet. In his first few seconds, he was screaming and seemed extremely scared. His excitement clearly faded as his eyes rolled upwards and he fainted, not once but thrice. His instructor was apparently unaware and having a good time of his own, laughing and enjoying the ride. But while Adame was horribly scared of his ride, he managed to say that he was feeling good about it. At the end of the video, he tried to put a brave front.

This skydiving video totally reminded us of the "Land Kara De Bhai" viral video. The guy in that video, Vipin Sahu had expressed his desire of trying skydiving next. Well, we won't be surprised if his skydiving video turns out to be little or more like this US Marine's. This guy sure chose the go-big-or-go-home way to deal with his fear by jumping straight out of the plane.

(The above story first appeared on LatestLY on Sep 16, 2019 01:01 PM IST. For more news and updates on politics, world, sports, entertainment and lifestyle, log on to our website latestly.com).