The sight obviously scared people around and the owner agreed that it was his mistake that Juliet got out. He assured that she's not dangerous. 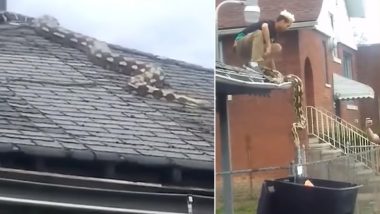 Imagine peeking out of your window and watching a huge snake slithering on the roof of a neighbour's house? A similar spooked up scenario happened with a dozen of neighbours in an East Seven Mile area in Detroit when they saw a huge python slithering on the garage roof of a house. It was actually a pet python named Juliet who had escaped the house and climbed on to the rooftop. It was 18-foot long, reticulated python a pet owned by Devin Jones-White. It is a nonvenomous species and also the world's longest snake. A video of the snake slithering on the roof and then the owner helping it get down was captured by a neighbour and shared on social media. The video of the rescue is going viral. Australian Woman Finds 4-Metre-Long Python Next to Bed Apparently Wanting to Eat Her! Rescues Herself, Watch Shocking Video.

The sight obviously scared people around and the owner agreed that it was his mistake that Juliet got out. He assured that she's not dangerous. "But she's not going to do anything to a person. She's never harmed anyone, I got her from an older couple. She doesn't really know anything about the wild," Jones-White told Detroit's WXYZ. He said Juliet could have possibly been scared of the dog barking at her and thus decided to move herself to a safe spot where she had never been. But soon, dozens of neighbours gathered around and started shooting the snake on their phone cameras. Python Covered With More Than 500 Ticks Rescued From Swimming Pool in Australia, View Pictures.

Juliet was on the roof for about 10 minutes when her owner came out to help her get down. He climbed on the roof and helped the moving snake with one arm. While he struggled to pick up the huge reptile, he also fell down as he tried to get her down on his shoulder. But he quickly got up and helped Juliet to slide down on his shoulder. The owner said that because more crowd gathered she refused to come down. "When everybody came out and crowded around her, she was spooked even more with the crowd. That's why she never came down and stayed up there, doing her own thing."

White-Jones also mentioned that since Juliet is a nonvenomous species, he does have a special permit to own the python. "She's been around people her entire life. She was born in captivity, raised in captivity," Jones-White said to WXYZ. But still owning an 18-foot long python as a pet is sure a shock for those living around.

(The above story first appeared on LatestLY on Apr 21, 2019 01:12 PM IST. For more news and updates on politics, world, sports, entertainment and lifestyle, log on to our website latestly.com).