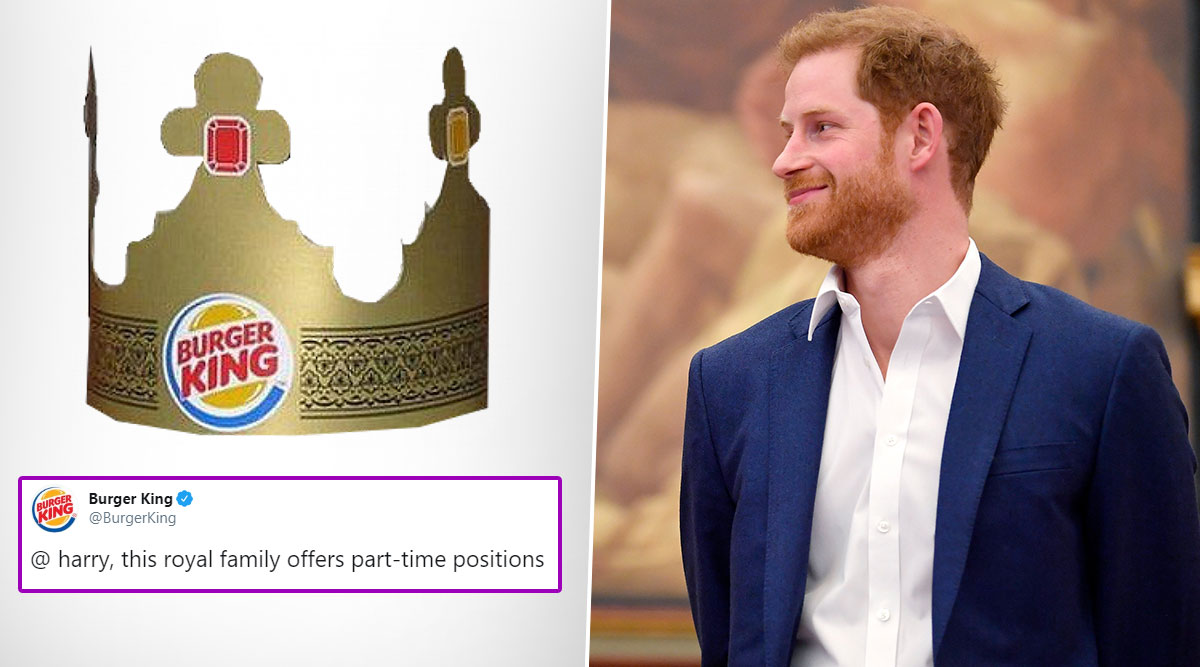 The Duke and Duchess of Sussex, Prince Harry and Meghan Markle decided to step back from the royal duties, and become financially independent. Their decision took the British monarch and the rest of the world by storm. While some appreciated their choice, others seem to get another opportunity to start a meme rivalry on social media—happily called Megxit. Now it appears that Prince Harry’s job hunting will take a pause, even before it started. Well, fast-food giant, Burger King just offered a part-time job to Prince Harry, and Tweeple can’t keep their calm! You can’t miss these funny memes and jokes that have taken over the internet. We don’t know, if Prince Harry is going to accept the job or not, but the memes are here to stay. Prince Harry and Meghan’s Exit From the Royals Reminds Desi Twitterati of K3G, Hilarious #Megxit Memes and Jokes Will Make You ROFL.

It was just last week, when Prince Harry and Meghan announced their plans to “step back” as members of the royal family. While they might not lead the same life of luxury, the crown allows, at least Harry’s got some job prospects. And here too, he will be able to wear a crown! The Burger King branch in Argentina, initiated the joke. On Instagram, the food-giant wrote, “Dear Duke, you can look for your first job without giving up your crown.” Madame Tussauds Removes Prince Harry, Meghan's Waxworks from Royal Family Set.

Prince Harry is yet to respond to the job offers. Possibly, he is looking for other options too! But commentators were quick to praise Burger King for the tweet. They had won the internet, at least for now!

Have You Thought of That, Burger King?

Can you match the Royal Family wages though?

What do you think, will Prince Harry accept the job offer? Or he has some more job offers in the queue? Let us admit; he is no ordinary and his decision to become financially independent is respected by Harry’s followers across. The future will say, what Harry and Meghan have in the news for us. Meanwhile, let us enjoy the Megxit memes that continues to pour in.