From ‘Boriya Bistar,’ to ‘Sutli Bomb,’ Priyanka Chopra's outfit inspired some hilarious social media reactions. Here we bring you some of the best funny memes from the internet for you to laugh out loud and have a great day ahead. 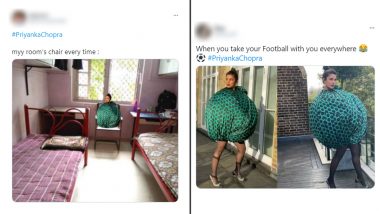 Did you see Priyanka Chopra’s ball green dress? The green, polka-dotted ball dress is everywhere on social media. Maybe not in a great 'fashion statement’ way, but more in the form of hilarious memes. Like her 2019 Meta Gala look funny memes, desi netizens are having a wild time creating funny memes and jokes on the latest ball green dress. From ‘Boriya Bistar,’ to ‘Sutli Bomb,’ the outfit inspired some hilarious social media reactions. Here we bring you some of the best funny memes from the internet for you to laugh out loud and have a great day ahead.

Priyanka is currently over the moon with the success of her memoir, Unfinished. While she is also busy shooting amid the pandemic, the actress never fails to be in the limelight. Only this time, in the form of hilarious memes. Her quirky look is a ball-shaped polka dot costume in green colour. It is unsure exactly where the actress wore the dress to; the photos, initially posted on Instagram, went crazy viral on the internet. The ensemble, reportedly from the brand Halpern, basically looks like a giant, draped orb.

Even Priyanka is LOLing at the viral memes, screenshots of which she sportingly shared on her Insta stories. Netizens put their humour quotient on, and reactions are so hilarious. Check out the best ones below.

When you take your Football with you everywhere 😂⚽️ #PriyankaChopra pic.twitter.com/Q4fxrq1sT1

Memes In A Nutshell

A post shared by ITS AMAZING ZING ZING (@itsamazingzingzingg)

Aren’t they hilarious? Social media users always find their ways to keep light-heartedness up on the internet. Be it ‘chacha’ from the UP’s Baghpat chaat war or Shweta or ‘Pawri Hori Hai,’ Tweeple surely have got the best reactions. Priyanka’s ball green dress is just the latest addition to netizens’ favourite meme templates!

(The above story first appeared on LatestLY on Feb 24, 2021 12:24 PM IST. For more news and updates on politics, world, sports, entertainment and lifestyle, log on to our website latestly.com).