Reese Witherspoon Starts #2020Challenge on Social Media, From Cats, Dogs to Famous Characters, People Share Photo Collage to Describe Their Mood in Months of the Year 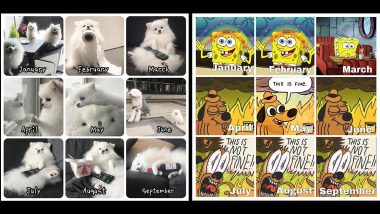 The eighth month of the year ongoing and how are you holding up? Everyone is collectively praying and hoping for at least one immensely positive news to look forward to the few months that are left of the year. The year 2020, however, has been far from kind. While it is already been a target of several funny memes and jokes over the last few months, there's a new challenge to describe how everyone feels about this year. Called the #2020Challenge, in this people are posting a picture collage of themselves to showcase their mood each month and the range of emotions felt from April to September go from sadness to anger! The challenge was started by Reese Witherspoon and now people have joined along to share their 2020 mood calendar using pictures of cats, dogs, famous characters and meme formats too. 'My Plans vs 2020' Funny Memes Take Over Twitter, Netizens Joke About How Disappointing This Year Is Shaping Up to Be!

It seems Reese Witherspoon started this challenge when she shared the picture grid with her photos. It soon evolved into a hashtag and you know the drill. People are posting their mood calendar with each picture to depict how they feel in each month. What's funny is the range of emotions and how they change from April to September. With a trend that's started with celebs, people are also participating enthusiastically and well some of them have given their funny spin using dogs, cats to cartoon characters in the #2020Challenge. Twitter User's Thread on 'Months of 2020 as Rajpal Yadav' is an Accurately Funny Reminder of How This Year Has Gone By So Far.

Here Are Some Funny Pics From Other Netizens:

Fine to Not Fine!

This Baby's a Mood!

A Meme Version for Entire Year!

The meme version of the #2020challenge pic.twitter.com/X5bWSvlNTS

The Cat's Got So Many Expressions!

Mr Chuck is All of Us!

If Komolika Was a Mood

This Pom Pom is Chilling Out

Looks like, people are more expressive with their pets and pooches. The last row with the months from June to September are the most fascinating to funny ones. Clearly, you are not the only one to go through a diverse and mostly annoyed mood board for this year.

(The above story first appeared on LatestLY on Aug 07, 2020 03:52 PM IST. For more news and updates on politics, world, sports, entertainment and lifestyle, log on to our website latestly.com).