Remember Kelleth Cuthbert, 'Fiji Water Girl' at Golden Globes 2019? She Just Landed a Role in Soap Opera 'The Bold and The Beautiful'

What role she is playing isn't known yet but the Instagram page of the series uploaded a picture in which she is seen holding a tray with water bottles again. 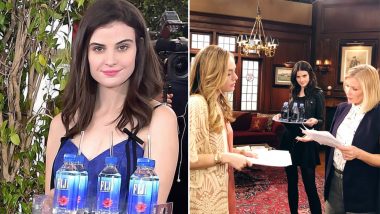 One appearance on the red carpet can work wonders for someone and who better than Candian model Kelleth Cuthbert to agree? Known as the Fiji Water Girl, she proved to be a serial photobomber at the red carpet event at the Golden Globes. And her confident looks and pretty face have now got her a gig in one of the most popular US soap opera The Bold and The Beautiful. Cuthbert made her presence quite obvious at the prestigious event and being a model herself, she knew exactly how to face the camera, even if she was just meant to carry water bottles. Her promoting the brand has indeed worked in her own promotion as she landed herself a cameo in the series. Fiji Water Girl Kelleth Cuthbert From the Golden Globes Gives Tips to Photobomb Perfectly.

What role she is playing isn't known yet but the Instagram page of the series uploaded a picture in which she is seen holding a tray with water bottles again. Kelleth Cuthbert also posted a picture on her Instagram along with the cast of the series Darin Brooks, Courtney Hope, Heather Tom and Nia Sioux. What exactly is her role is not yet revealed although in the picture she looks like she fit in perfectly! According to some reports, she will be seen on the episode that'll get aired on February 6. Golden Globes Photobomber AKA Fiji Water Girl Kelleth Cuthbert Inspires HILARIOUS Memes.

Look who was on the #BoldandBeautiful set today! 👀 #ifyouknowyouknow

Kelleth Cuthbert's IMDB page too notes her appearance as the Fiji Water Girl at the Golden Globes. Jamie Lee Curtis was not too impressed by the blatant promotion that was going on the red carpet and has even blasted the brand. But Cuthbert was seen photobombing the pictures of stars Dakota Fanning, Nicole Kidman, Jim Carrey, Luke Evans, Richard Madden, Cody Fern, among many others. Although she had said in an interview later that she didn't mean to photobomb them all, she has got her reward.

(The above story first appeared on LatestLY on Jan 22, 2019 01:21 PM IST. For more news and updates on politics, world, sports, entertainment and lifestyle, log on to our website latestly.com).