Santa Claus Screams 'Get The F*ck Out' at Children After Fire Alarm Goes Off at Event in England, Organisers Apologise 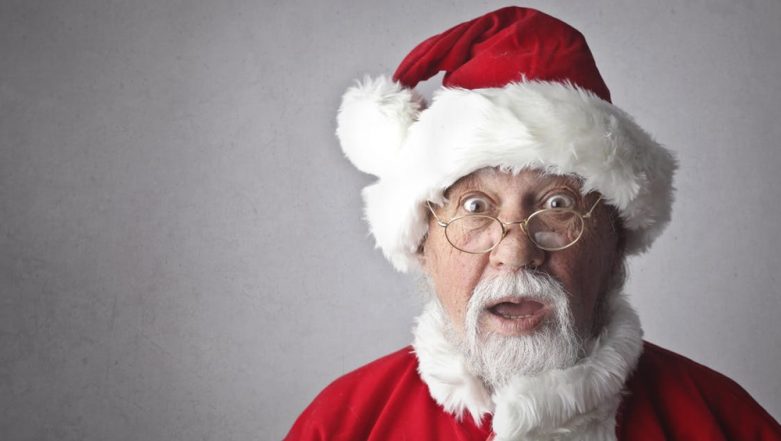 If elderly people are excited about Christmas parties, children are awaiting their favourite Santa Claus. The vibe of the festival of Christmas is in the air and several events are held across with decorated trees and Santa Claus meets. But an event in England went horribly wrong when Santa Claus ended up swearing at the gathered children along with the parents. The event that took place at St. Ives in England had abuzz of fire alarm and in order to evacuate people, the Santa Claus ended up saying, "Get the Fuck Out!" at the crowd. He ripped off his hat, the hair and screamed at the crowd, thus leaving the kids and the parents shocked. Is Santa Real? US Teacher Loses Her Job Ahead of Christmas For Telling Children The Truth About Santa Claus.

The man hired to become the Santa had a good intention but his choice of words have left the parents fuming. Although evacuating the building was necessary, the man forgot his role and took off his beard, hat and screamed at the crowd. One of the parents was quoted to the Sun, "People were in the process of vacating the building and in came angry Santa swearing using the most vile language, ripping off his hat and beard with steam literally coming from his ears, not too sure why he was so cross?" Someone else also mentioned that the Santa person was creating a havoc, only creating more panic among the children. Christmas 2018: Who is Santa Claus? Surprising Facts About Father Christmas, Including His Connection With Coca-Cola.

There wasn't a major fire in the building but some smoke in the hall had activated the fire alarms. The alarm sure raised an alert and the Santa only wanted to push people out of the venue. Seeing a screaming Santa, the kids were horrified. The organisers of the event had to apologise to the parents. "FESt wish to apologise for any offence or distress caused to parents and children by the attempts to ensure all visitors and staff had exited the building and were safe," they stated.