The Black Nun: Here’s the True Ghost Story of Sarah Whitehead Who Many Believe Still Haunts the Bank of England, Ready for a Nightmare? 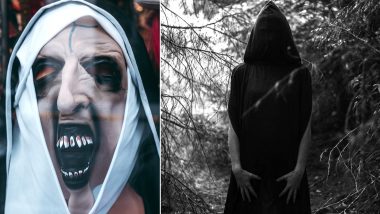 The Nun, remember the 2018 movie? It was so scary that YouTube actually banned the trailer because it was traumatising for people, thanks to various scenes, that will scare the bejesus out of you! So, was the movie inspired by a real story? We are not really sure about that, but there is actually a nun that has been scaring employees at the Bank of England, for more than a century now. Sarah Whitehead, also known as The Black Nun is the name of the woman whose ghost is said to haunt the Bank of England, on account of her brother, who was an employee at the bank and was charged with forgery in 1811. He was hanged till death for the crime in 1812. Many believe that his sister, Sarah, known as The Black Nun, still haunts the bank. Allow us to take you this true ghost story that might give a nightmare for life. Bhangarh Fort in Rajasthan Horror Stories: Know About The Ghosts of Most Haunted Fort in India.

It was in 1811, when a man called Paul Whitehead used to work in the cashier’s office at the Bank of England, located at London’s Threadneedle Street. He was considered to be courteous and gentle; Philip had a somewhat cruel side to him. He was secretly forging documents and defrauding the bank. One fine day, the bank found out about his evil deed and Philip was imprisoned. The penalty for committing bank fraud and forgery at the time was death.

In early 1912, he was hanged for his crimes. However, it is believed that his execution was kept a secret. Philip’s sister, Sarah Whitehead, who was extremely close to him, was not informed about the death of his brother. She used to visit the bank, every day, asking about the whereabouts of his brother. Sarah would make daily appearances to the bank and ask, “Have you seen my brother?” But everyone said no. Until one bank worker, out of pity, admitted that his brother was being hanged. She could not take it. Horror Tale of Saffron BPO in Gurgaon: Ghost Story of Girl Named Rose 'The Dead Girl Living' Will Make You Hope It's Not Real!

Sarah began wearing nothing but a long flowing black dress, with a veil that covered her face, as if she were on her way to a funeral. This is how she earned her nickname, “The Black Nun.” Wearing that spooky black attire, she would visit the bank regularly, asking if anyone saw his brother. Bank employees used to pay her sums of money out of pity and help her deal with her deep grief. But her visit became repetitive, and Sarah’s behaviour was turning into aggression.

By 1818, the bank officials had grown tired of her daily disturbances. They gave her a sum of money on condition that she would never return to the bank again. Sarah agreed and never went to the bank. At least, not until she was alive. She eventually passed away and was buried right next to the bank, at the nearby churchyard of St. Christopher-le-Stocks. However, after her death, reports of very strange things in and around the band surfaced, and it continues till today.

Bank employees apparently started seeing her ghost. The Black Nun would appear out of nowhere in front of the startled bank employees and customers, very often, and enquiring, “Have you seen my brother?” and it is still seen to this day. It is uncertain what would she do, if anyone ever answered ‘yes’ to her question. But if you are ever in the area and a scary-looking pale woman in a black dress and veil asks you the same question, just politely, say, ‘no.’

(The above story first appeared on LatestLY on Aug 13, 2020 10:00 PM IST. For more news and updates on politics, world, sports, entertainment and lifestyle, log on to our website latestly.com).