Bhangarh Fort in Rajasthan Horror Stories: Know About The Ghosts of Most Haunted Fort in India 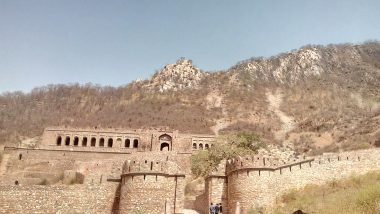 If you love reading about ghost stories then you'd know that certain places in India are notorious for their haunting tales and if there is one state on that list, it is Rajasthan. The desert state which is home to some of the most beautiful historic monuments has also a set of horror tales from some of these locations. A top on that list is Bhangarh Fort in Alwar. This fort is said to be the most haunted fort in India. From a flourishing kingdom, it is said to become deserted in one night! If you are keenly interested in what makes it so, there are several accounts of locals as well as pieces from the past that depict some mysterious and paranormal connections to this monument. 7 Haunted Places in India and Their Spooky Horror Tales.

The Curse of Guru Bala Nath

It is said that a sage named Guru Bala Nath used to sit and meditate around the place where this fort was established by King Madho Singh in the 17th century. While Bala Nath gave permission to build the fort, he had a condition. He stated that the fort should be constructed in a manner that its shadow should not fall or touch his house. The King took it lightly and built the fort ambitiously. But as Bala Nath had said, the moment the fort's shadow was cast on the sage's house the fort was doomed. Bhangarh is said to have immediately transformed into a cursed city. No other structures could be built here even later. The tomb of Guru Bala Nath is still there among the ruins of this fort.

There's another tale of Bhangarh fort that links it to paranormal activities. Ratnavati the Bhangarh princess was very beautiful and attractive. When the family was looking for suitors, a black magic practising wizard or a tantrik named Singhia decided to woo her. There were several good suitors willing to get married to her, but Singhia decided to use a black magic potion to attract Ratnavati. The princess figured out the plan and rejected the potion. She is said to have put it on the ground which turned into a rock. The rock then rolled over and crushed the black magician. But before his death, Singhia cursed the city of Bhangarh to death.

Also, later in the battle between Ajabgarh and Bhangarh, princess Ratnavati was killed. Now there's a belief among the locals that Ratnavati has returned in a different form and stays in the fort. 6 Spine-Chilling Haunted Places in Mumbai You May Want to Visit for a Spooky Experience.

These are what the old tales say, but even those who have visited as well as the locals living nearby have experienced some kind of mysterious activities from inside the fort. A group of boys decided to explore the premises after sundown one day. They saw a man sitting in the grilled window inside the fort and grinning at them..... Spooky! People have claimed that have heard eerie screams, women crying and sounds of bangles coming from inside the fort. The fort is thus closed for visitors post 5 PM and nobody is allowed even near it at night. So, what do you think? Plan to visit the country's most haunted fort?

(The above story first appeared on LatestLY on Jul 11, 2020 06:00 PM IST. For more news and updates on politics, world, sports, entertainment and lifestyle, log on to our website latestly.com).