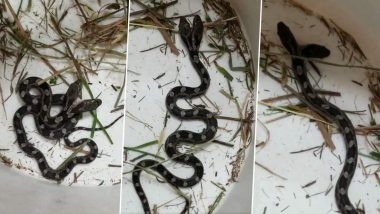 A two-headed baby snake gave a woman at Alexandar County, located in US state of North Carolina the fright of her lives. The reptile was found inside Jeannie Wilson' sunroom. She thinks it is a one-foot long rat snake. Wilson who found the snake near slithering near an end table called her family members to inform them. The Catawba Science Center said the baby black rat snake is rare and only one in 100,000 has two heads. The Catawba Science Center plans to keep the snake and use it in its programs for school-age children. Also, Wilsons' named it 'Double Trouble'. Love Triangle! Two Male Pythons Fighting over a Female Snake, Fall into Kitchen Bringing The Ceiling Down in Australia (See Pictures)

She told Newsweek that she did not want to kill the snake, so caught it and put it inside a jar. She added, "I saw its heads first and couldn't believe it. I didn't want to kill it so we put it in a jar." The Alexander County resident later shared a video of the snake on Facebook, revealing that she had nicknamed it "Double Trouble". Sharing a video of it on Facebook, she wrote, "Ok facebook...anybody out there know of a place that would take Double Trouble here and care for him." Snake Crawls Into Sleeping Russian Woman’s Mouth, Horrifying Video Shows Doctors Pulling Out the 4-ft Long Serpent From Her Throat

Alexander Co- this woman from Ellendale got quite a surprise in her sunroom this weekend. A two headed baby rat snake slithered in. Her reaction tonight on eyewitness news starting at five. pic.twitter.com/kBxO2o1KuG

Wilson was quoted as saying, "I called my son-in-law, who wasn't far away, and he said he’d be back. I am not crazy, guys. He’s got two heads. When he got there, he said, 'He does have two heads, doesn't he?'" It is not known from where the two-headed baby rat snake slithered inside the house. The Science Center plans to keep the snake and use it in its programs for school-age children.

(The above story first appeared on LatestLY on Sep 30, 2020 04:23 PM IST. For more news and updates on politics, world, sports, entertainment and lifestyle, log on to our website latestly.com).