UFO Found in Antarctica? The Google Earth Picture is Just a Natural Phenomenon

A video that was uploaded on YouTube showed the picture and claimed it to be the remains of an extraterrestrial craft. But it has now come to the front that it is just a natural phenomenon and not a UFO. 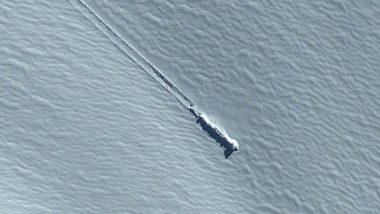 UFO hunters found a picture on Google Earth which resembled an avalanche and tried to convince that it is an alien spaceship crash site! This picture showed a trail of ice sheet leading towards a white object, which is covered in snow. The site is on the side of a glacier near Mount Paget, a 9,629-foot-tall prominently on the British-controlled island far to the south of Argentina. A video that was uploaded on YouTube showed the picture and claimed it to be the remains of an extraterrestrial craft. But it has now come to the front that it is just a natural phenomenon and not a UFO.

The video was shared by a popular conspiracy YouTube channel Secure Team 10. In the video, the narrator says, “It appears to be some sort of massive elongated or cigar-shaped that at some point – and we don’t know when – came to a screeching halt in the snow. This could be something which came from the air and crash-landed.” The video has garnered half a million views in just 24 hours and naturally, people got talking but a professor has denied all such possibilities.

Check the video of the crash landing over Antarctica:

A geologist Richard Waller from Keele University said the picture leads back to a mountain peak. So the concerned spot appears at the foot of a mass of disturbed snow. So the object is nothing but debris at the end of snow trailed from the peak behind. “Part of a hanging glacier appears to have collapsed, you can see the avalanche debris at the foot of the slope, and this could be a large block of ice that has travelled further as a consequence. The track shows that it's sliding over a snow-covered glacier before it comes to a rest,” he said while talking to Daily Mail. Several people have criticized the YouTube channel for spreading unauthentic information. With so many new research being done about life other than Earth, such videos seem misleading.

(The above story first appeared on LatestLY on Mar 06, 2018 10:49 AM IST. For more news and updates on politics, world, sports, entertainment and lifestyle, log on to our website latestly.com).