What is The Hindi Word For Divorce? This Twitter Thread Will Tell You What Marital Separation is Called in Different Indian Languages From Gujarati to Marathi 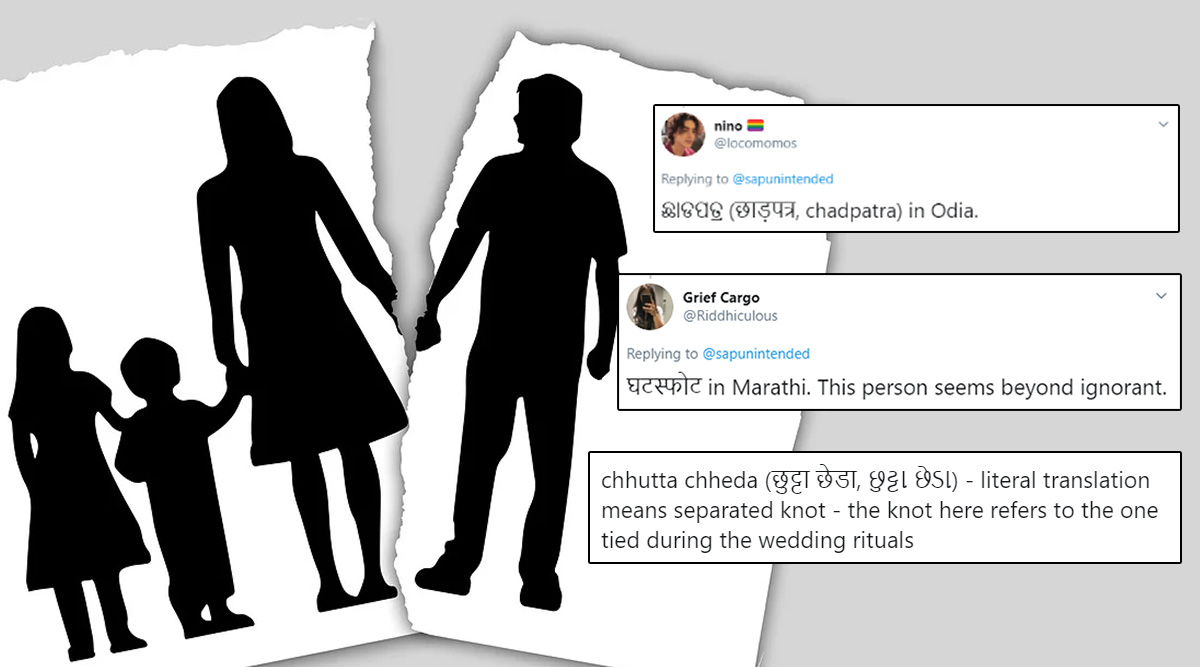 Social media can be an interesting place at times, especially Twitter where you can come across everything from fun facts to utterly silly tweets. You can also learn a lot of new things on this microblogging platform, like words for divorce, for instance? A Twitter user's claim that there is no word for Divorce in Hindi has grown into a thread of what divorce is called in other languages across the nation. So if you were unaware of what the word divorce is called in different languages, Twitterati is here to help. From Marathi, Gujarathi to Odia and Tamil, this thread gives you all the words for divorce. Thalis of India: Viral Twitter Thread Gives Details of Food Items in Local Cuisines Made From All States of The Country.

This thread started with a communal reference to it, boasting about Hinduism. However, such tweets and references need to be avoided to spew hate. Twitterati joined in to add onto the knowledge of the original user who tweeted, a challenge to find the Hindi word for divorce, claiming there is no such word because it was never promoted in Hinduism! Soon enough, others joined in to share what divorce is called in not just Hindi but other languages like Gujarati, Marathi, Malayalam, Tamil.

Check The Twitter Thread About What Divorce is Called in Different Languages:

1. if talaq is not a hindi word and just an urdu word then MOST hindi words aren’t hindi

2. gujarati has a dedicated word for divorce

proud to have a brain pic.twitter.com/rtUWy3m7EA

Gujarati Word for Divorce is...

for those who want to know: https://t.co/dvjPKVrhKf

Marathi Word for Divorce is...

घटस्फोट in Marathi. This person seems beyond ignorant.

Hey, also Marathi has a word for breaking up a Marriage. It's काडीमोड 'kadi mod'.

Kannada Word for Divorce is...

Telugu Word for Divorce is...

Odia Word for Divorce is...

Tamil Word for Divorce is...

Clearly, the girl who made the original tweet got more than she needed to know. And not just her, a lot of people know now what divorce is called in other languages. So that's how Twitter is, it can start some interesting threads based on one tweet! It also shows the beauty of the lingual diversity we have in the country.