X Æ A-12 Musk Is Elon Musk and Girlfriend Grimes Baby Boy's Name and Here's The Meaning and Its Pronunciation! 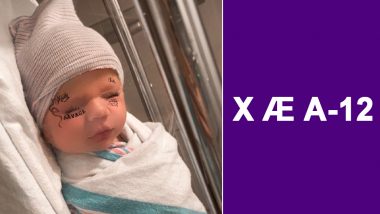 Elon Musk's girlfriend Grimes has given birth to their first child together and his name is *brace yourself*  "X Æ A-12 Musk". Can't pronounce? Us neither! The Tesla CEO Musk confirmed that Grimes had given birth to a baby boy, tweeting: “Mom & baby all good.” He also shared a picture of the little one by digitally editing the term "Savage" on it. When one follower asked him the about the name of his son,  Musk replied: “X Æ A-12 Musk” and ever since it has been driving people crazy about how exactly would you pronounce the name! The picture of his son with illustrated graphics on top has to quite a unique way of introducing him to the world. To one of the followers' "Congrats!" comment, he replied: "Thanks :) Never too young for some ink haha." Elon Musk Hints at Coming ‘Doomsday on Earth’ With ‘Oh God, the Economy’ Comment? Latest Tweet by SpaceX CEO Sparks Meme-Fest and Reactions.

Netizens are busy wondering how exactly do you pronounce X Æ A-12. However, the closest we have gotten to deciphering the name is some of the Redditors decoded versions. While it is not known if Musk is just being cryptic just having some fun but according to Redditors, the ligature Æ is 'Ash' which means chances are that the baby may be called Ash Musk.  Another Redditor, NewFolgers said, "The name for the ligature Æ is "ash" ... so in the name, it may be pronounced that way.  The Lockheed A-12 was part of the Archangel internal design effort ... So maybe they're thinking: X Ash Archangel Musk". Some others believe that maybe it reads Sasha or 'Xea', pronounced 'Zey-ah'.

The 48-year-old already has five sons, Damian, Griffin, Xavier, Saxon and Kai from his first marriage to Justine Wilson, they have also lost a child, Nevada, to sudden infant death syndrome (SIDS) in 2000. Grimes hinted at her pregnancy in the month of January in the most unique way. She posted a nude picture on Instagram with a digitally-superimposed image of a foetus visible through her translucent stomach.

However, she later shared a censored version sans the bare nipples. The celebrity couple is said to have been romantically involved from May 2018 and made their first appearance in the Met Gala.  However, recently there were reports of the SpaceX CEO being allegedly accused by Johnny Depp that he was being cheated by Amber Heard with Elon Musk. Leaked pictures showing Musk cuddling with Amber Heard in a private elevator of Depp's penthouse added on to the pickle. It was reported that Elon Musk had then unfollowed his girlfriend Grimes who was pregnant with his child.

(The above story first appeared on LatestLY on May 05, 2020 06:30 PM IST. For more news and updates on politics, world, sports, entertainment and lifestyle, log on to our website latestly.com).