Ahead of WWE Money in the Bank 2019 PPV Where Roman Reigns Will Face Elias, ‘The Big Dog’ Gets Nominated in MTV Award for Best Real Life Hero (View Pic and Videos)

World Wrestling Entertainment (WWE) superstar Roman Reigns made a come back to Monday Night Raw on Feb 25, 2019, where he announced that his leukaemia is in remission. 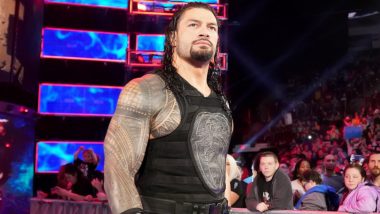 World Wrestling Entertainment (WWE) superstar Roman Reigns made a come back to Monday Night Raw on Feb 25, 2019, where he announced that his leukaemia is in remission. Since then 'The Big Dog' has been making good news since he returned to WWE, as Reigns also featured at WrestleMania 35. Ahead of Money in the Bank (MITB) 2019 PPV where Roman Reigns will face Elias, 'The Big Dog' gets nominated in MTV Award for Best Real Life Hero. WWE Raw Feb 25, 2019: Good News for WWE Fans As ‘The Big Dog’ Roman Reigns Announces That His Leukemia Is in Remission.

Roman Reigns indeed deserved to be nominated for Real Life Hero award as he is a true warrior and fought his cancer disease bravely. Recently Drew McIntyre, who was Reign opponent at WrestleMania 35 praised The Big Dog in an interview with Brian Fritz of SportingNews.com. The Scottish Psychopath appreciated Reigns presence in WWE and said that he has the ability to lead the WWE locker room and deserve all praises from fans and peers. WWE RAW April 15, 2019 Results and Highlights: Smackdown’s AJ Styles Joins Roman Reigns and Seth Rollins for the 6-Man Tag Team Match in Superstar Shake-Up Night.

Speaking about his fight with Elias, which built up just after a week of Superstar Shake-Up as both wanted to be the 'Biggest Acquisition in the history of SmackDown. Elias allied himself with Shane McMahon as both men attacked Reigns in the ring, as the former wanted to take revenge for punching his father. On April 16, 2019 episode of SmackDown when Vince McMahon called Elias as the biggest entry in the blue brand of WWE, Reigns came out and addressed the crowd that SmackDown is his yard now and punched Mr.McMahon in that process. Elias challenged Roman Reigns in a fight at MITB PPV the same night when he attacked Reigns along with Shane McMahon. Roman Reigns without wasting any time accepted the challenge. WWE RAW April 22, 2019 Result and Highlights: Bray Wyatt Returns, AJ Styles Will Face Seth Rollins for Universal Championship at Money in the Bank PPV.

The USOS comes in aid of The Big Dog and The Miz at May 14, 2019 episode of SmackDown

The @WWEUsos were WILD CARDS once again on #SDLive as they rushed to the aid of @WWERomanReigns and @mikethemiz! pic.twitter.com/ysNBBdA5DX

Shane McMahon will face The Miz in a steel cage at Money in the Bank PPV on May 19, 2019. Miz lost to Shane at WrestleMania 35 in a falls count anywhere match. Apart from these matches, it will be interesting to see how Seth Rollins defends his Universal Title against AJ Styles. Also this coming Sunday (May 19, 2019) Becky Lynch will be doing double duty where she will face Charlotte Flair and Lacey Evans in two different matches at the same night for SmackDown Women's Champion and Raw Women's Champion respectively.

(The above story first appeared on LatestLY on May 16, 2019 01:57 PM IST. For more news and updates on politics, world, sports, entertainment and lifestyle, log on to our website latestly.com).