WWE Raw Feb 25, 2019: Good News for WWE Fans As ‘The Big Dog’ Roman Reigns Announces That His Leukemia Is in Remission

Roman Reigns had been away from WWE since October, 2018 due to relapsing of his leukemia disease. 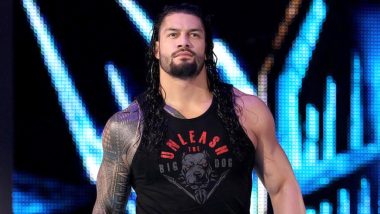 Roman Reigns announces that his leukemia is in remission (Photo Credits: Facebook)

On this past episode of Monday Night Raw, we saw the much-awaited appearance of Roman Reigns. WWE fans gave a good welcome to 'The Big Dog'. Roman Reigns had to walk away from WWE last year in October due to his suffering from leukemia. Roman had been facing with this disease for last 11 years, however, four months back it relapsed suddenly. To his bad luck, he had to surrender his WWE Universal Championship belt which he won after a lot of struggle from Brock Lesnar at SummerSlam last year. Fans can rejoice with the good news that Roman Reigns leukemia is in remission, as this is confirmed by the former WWE Universal Champion, Roman Reign himself. Keep scrolling down below to know more updates on Roman Reigns. WWE Raw Feb 25, 2019 Live Streaming & Match Timings: Preview, Predictions, TV & Free Online Telecast Details of Today’s Fights.

Leukemia is a cancer of the blood or bone marrow. Blood cells are produced by bone marrow. It happens when there is a problem in the production of blood cells.It affects the leukocytes or white blood cells.

Surprisingly this cancer is found prevalent in even children below 15 years of age.

Acute leukemia develops quickly and worsens rapidly on the other hand chronic leukemia gets worse over time.

Leukemia can be fatal, but one can get this treatment and get its symptoms under control.

In this disease, the bad cells surround the good cells in the blood.

Will Roman Reign make his appearance at WrestleMania?

Roman Reigns was also later joined by his former Shield partner Seth Rollins, who hugged him in happiness. Later in the show The Big Dog showed his massive come back by rescuing his other former Shield partner Dean Ambrose. Roman gave Superman punches to Baron Corbin, Bobby Lashley, Elias and speared Drew Mckintyre. WWE superstars expressed on twitter their happiness for Roman Reigns leukemia recovery and his return to WWE.

Real superheroes exist. Back and with strength and purpose! It’s your yard Roman. Your time is most certainly NOW! https://t.co/jEBDtQm39W

The USOS tweeting on Roman Reigns

Now this news is very significant for WWE universe, as they were missing Roman Reigns Superman punches and his killer spears. This can be added as one other story of an athlete battling the cancer disease and making a return back. Stay tuned to our website-Latestly for more updates from World Wrestling Entertainment.

(The above story first appeared on LatestLY on Feb 26, 2019 11:41 AM IST. For more news and updates on politics, world, sports, entertainment and lifestyle, log on to our website latestly.com).