WWE Money in the Bank (MITB) will take place on May 19, 2019, at XL Center, Hartford, Connecticut, United States. 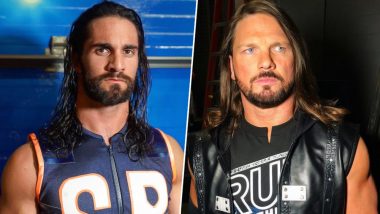 After completion of WrestleMania 35, WWE head towards it other events. Last week we saw the superstar shake-up on Raw and SmackDown, this week the storyline for the Universal Championship got set up for the upcoming Pay Per View. WWE Superstar The Phenomenal AJ Styles made his way to earn a title opportunity against Seth Rollins at Money In The Bank and Bray Wyatt returns to Monday Night Raw. WWE RAW April 15, 2019 Results and Highlights: Smackdown’s AJ Styles Joins Roman Reigns and Seth Rollins for the 6-Man Tag Team Match in Superstar Shake-Up Night.

WWE Money in the Bank (MITB) will take place on May 19, 2019, at XL Center, Hartford, Connecticut, United States. AJ Styles joined the Red Brand of WWE last week and got right into business by defeating Samoa Joe and Rey Mysterio last night to qualify for the main event No 1 contender final match for Universal Championship on the same night itself. Styles faced Baron Corbin in the final main event as Corbin made his way by defeating The Miz and Drew McIntyre. AJ Styles defeated Corbin to make his path clear for Universal Championship match against Seth Rollins in the upcoming MITB PPV. Luke Harper Asks For His WWE Release! Wrestlers React on Former 'The Wyatt Family' Member’s Shocking Request.

Watch AJ Styles Speak after winning the No 1 Contender Match

EXCLUSIVE: There is NO lack of confidence for @AJStylesOrg as he looks ahead to his #UniversalChampionship match with @WWERollins at #MITB! #Raw pic.twitter.com/lv3hM80qSb

.@AJStylesOrg and @BaronCorbinWWE are doing EVERYTHING they can to punch their ticket to the #UniversalChampionship Match at #MITB! #Raw pic.twitter.com/fB8Uk1WgNJ

Bray Wyatt return back to WWE in new avatar!!!

.@WWEBrayWyatt is back and welcoming everyone to his #FireFlyFunHouse. Yes, you read that correctly. #Raw pic.twitter.com/VPI7lvZaDi

EXCLUSIVE: @RealBobbyRoode is no more. Moving forward, you must all address the #GloriousOne as ROBERT ROODE! #RAW pic.twitter.com/7yffAikBgQ

6. WWE Raw and SmackDown Women's Champion Becky Lynch defeated Alicia Fox, however, The Man got attacked by Lacey Evans after the match.

WWE is gearing up perfectly to build up with the story-lines for the coming pay per view. Fans have reasons to cheer up due to the return of Bray Wyatt in Firefly Fun House gimmick. Also, the Phenomenal AJ Styles got the opportunity to become the WWE Universal Champion. Click here to view highlights of WWE RAW April 22, 2019.

(The above story first appeared on LatestLY on Apr 23, 2019 02:18 PM IST. For more news and updates on politics, world, sports, entertainment and lifestyle, log on to our website latestly.com).