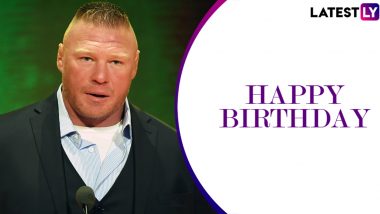 Brock Lesnar turns 43 years old on July 12, 2020. He is one of the best WWE wrestlers of all time. Lesnar has taken WWE to the next level and has played a big role in increasing the fan following numbers of WWE. Brock Lesnar possesses formidable wrestling skills. He has also appeared in UFC and has also won a title there. He is the only person till now to hold a world title in both WWE and UFC. On the occasion of Brock Lesnar birthday, we will take a look at the best wrestling matches of Beast Incarnate in WWE. Brock Lesnar Likely to Return at SummerSlam 2020; Will The Beast Incarnate Get Another Shot to WWE Title?

Brock Lesnar has improvised his wrestling skills at the University of Minnesota where his assistant coach was Shelton Benjamin. Beast Incarnate finished his amateur career as a two-time NJCAA All-American, the 1998 NJCAA Heavyweight Champion, two-time NCAA All-American, two-time Big Ten Conference Champion and the 2000 NCAA Heavyweight Champion, with a record of 106–5 overall in four years of college. Lesnar joined signed a contract with WWE, then known as WWF in the year 2000. Brock Lesnar met Paul Heyman, who is his current manager at WWE's developmental territory Ohio Valley Wrestling in the year 2000 itself. Lesnar made his debut on March 18, 2002 episode of Raw as a heel where he attacked Al Snow, Maven and Spike Dudley during their match. From the very first day in WWE itself, he has been accompanied by Paul Heyman. Workout Plan of the Beast Incarnate.

The major highlight of Brock Lesnar career is his victory against The Undertaker at WrestleMania 30, where he broke the Deadman's winning streak at the show of shows. Brock Lesnar is the only wrestler after Edge and Sheamus to have won Money in the Bank, King of the Ring and Royal Rumble. Brock Lesnar has given us some great matches with The Undertaker, Triple H, The Rock, Kurt Angle and CM Punk. Let us take a look at five oh his best matches below.

4. Brock Lesnar vs The Undertaker, WrestleMania 30

Brock Lesnar is currently signed to the Raw brand of WWE and he was last seen in action against Drew McIntyre at WrestleMania 36 where he lost his WWE title to the Scottish Psychopath. Lesnar's fans are eagerly waiting for his return to in-ring action. We wish Brock Lesnar a very Happy Birthday, may he always stay healthy and continue entertaining us for years to come.

(The above story first appeared on LatestLY on Jul 12, 2020 08:32 AM IST. For more news and updates on politics, world, sports, entertainment and lifestyle, log on to our website latestly.com).