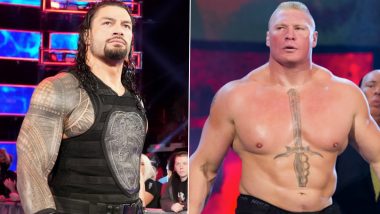 Brock Lesnar was last seen in action at WrestleMania 36 where he lost WWE title to Drew McIntyre. After that Beast Incarnate has not made any appearance. There were rumours for his return at SummerSlam 2020, however, it did not happen. Roman Reigns instead made a massive return as a heel at SummerSlam 2020 and in the very next week went to defeat Bray Wyatt and Braun Strowman for Universal title. Also, Lesnar's advocate and manager Paul Heyman has now allied with Roman Reigns. The Big Dog returning as a heel and having Heyman as his manager indicates that WWE has chosen him as Beast Incarnate replacement. WWE SmackDown Sept 18, 2020 Results and Highlights: Roman Reigns Teams Up With Jey Uso to Defeat Sheamus & King Corbin, Bayley Attacks Sasha Banks (View Pics)

Wrestling journalist Dave Meltzer of Wrestling Observer Nation stated that WWE is looking to book Roman Reigns just like Lesnar by giving him shorter matches and convincing wins. He further added that the Big Dog will have an amazing match with Jey Uso at WWE Clash of Champions 2020 which is scheduled to take place on September 27, 2020. As per reports, Brock Lesnar contract with WWE has expired and he is currently working as a free agent. Further, with Heyman now working with The Big Dog we cannot expect Beast Incarnate to be back in action soon.

WWE has also removed Brock Lesnar's merchandise from its online shopping store. However, it is expected that Lesnar will return once the crowd is back in the arena. Also, it will be interesting to see who will Paul Heyman work with once Beast Incarnate returns.

(The above story first appeared on LatestLY on Sep 21, 2020 09:28 AM IST. For more news and updates on politics, world, sports, entertainment and lifestyle, log on to our website latestly.com).