WWE SmackDown Sept 18, 2020, had few matches on the card, however, they were perfectly scripted to keep fans alive. We witnessed a tag match between Roman Reigns, Jey Uso and Sheamus, King Corbin. It was a Samoan street fight match. 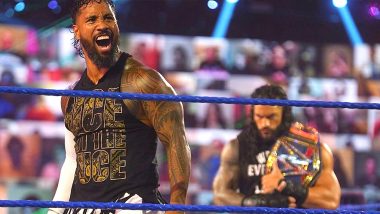 WWE SmackDown Sept 18, 2020, had few matches on the card, however, they were perfectly scripted to keep fans alive. We witnessed a tag match between Roman Reigns, Jey Uso and Sheamus, King Corbin. It was a Samoan street fight match. Jey at the beginning of the show promised that he will teach Sheamus and Corbin some lesson after what they did to him and his cousin last week on SmackDown. We also saw SmackDown women's champion Bayley yet again attack Sasha Banks. Meanwhile, you have arrived at the right platform, if you are looking for WWE SmackDown Sept 18, 2020 results and highlights. WWE Raw Sept 14, 2020 Results and Highlights: Seth Rollins Defeats Dominik Mysterio in Steel Cage Match, Drew McIntyre vs Keith Lee Ends in No-Contest as Retribution Interferes.

Both Reigns and Jey Uso put up a great fight against Sheamus and King Corbin. Uso was even put through the table during the street fight. However, later the cousins speared together their opponent, followed by a Uso splash by Jey on Sheamus which helped The Big Dog and Uso earn the victory. After the match, seeing Jey Uso celebrate Roman Reigns started giving stern look at his Clash of Champions opponent. Bayley damaged her best friend Sasha Banks neck in a surprise attack last week on SmackDown. The Legit Boss during the show came to revealed that Bayley is nothing without her, to everyone's surprise, SmackDown women's champion made a blindfold attack on Banks yet again with a steel chair shot. This has further deteriorated the condition of Sasha Banks.

Nikki Cross defeated Lacey Evans in one on one match. AJ Styles emerge victorious against Sami Zayn, after the match Jeff Hardy came and said that he is not a fraud or cheat. The Intercontinental Champion then revealed that he will put his title on the line against Styles and Zayn in a ladder match at Clash of Champions 2020. At the beginning of the show, we saw Heavy Machinery attack The Miz and John Morrison when Otis was being teased for Mandy Rose getting drafted to Raw.

What's Going on With Alexa Bliss?

What is going on with @alexa_bliss_wwe_?! #SmackDown

Big E Has a Surprise For Sheamus

@wwebige had quite the surprise for @wwesheamus and the security guard! #Smackdown

We are just a few days away from WWE Clash of Champions 2020 which is scheduled to take place on September 27, 2020. However, the heat for this event has already started to build up, it will be interesting to see how Roman Reigns fight against his cousin Jey Uso to defend his Universal title. Stay tuned with LatestLY for more updates and news from WWE.

(The above story first appeared on LatestLY on Sep 19, 2020 09:59 AM IST. For more news and updates on politics, world, sports, entertainment and lifestyle, log on to our website latestly.com).