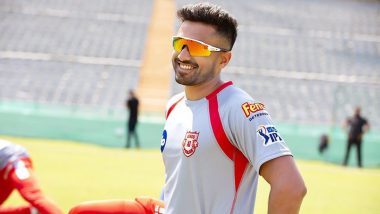 Kings XI Punjab received a huge boost ahead of IPL 2020 as their batsmen Karun Nair, who was recently tested positive for novel coronavirus couple of weeks ago has fully recovered. After his diagnosis, the 28-year-old batsman was advised to stay at his home in isolation and on Wednesday (August 12, 2020), he revealed that he has fully recovered. KXIP Squad for IPL 2020 in UAE: Check Updated Players' List of Kings XI Punjab Team Led by KL Rahul for Indian Premier League Season 13.

KXIP’s preparations for IPL 2020 took a huge hit when Karun Nair confirmed that he had tested positive for COVID-19 but according to a recent report from Sportstar, the cricketer recently revealed that his latest test has returned negative. The 28-year-old batsman is expected to join the Punjab camp soon where he will also undergo the mandatory coronavirus tests before UAE departure. IPL 2020 Players' Update: KXIP Captain KL Rahul Hits Nets Hard As He Gears Up for Indian Premier League 13 (Watch Video).

IPL 2020 is set to get underway from September 19 onwards in the United Arab Emirates after the governing council received official permission from the Indian government to host the tournament. Stadiums in Abu Dhabi, Sharjah and Dubai will host all the games behind closed doors while teams and staff members will be kept in a bio-secure bubble.

Karun Nair is one of the most important players in the Kings XI Punjab squad and they need him fit and firing if they are to win their first IPL title. The 28-year-old was the team’s third-highest run-getter in 2018 but missed a chunk of last season.

(The above story first appeared on LatestLY on Aug 12, 2020 11:57 PM IST. For more news and updates on politics, world, sports, entertainment and lifestyle, log on to our website latestly.com).