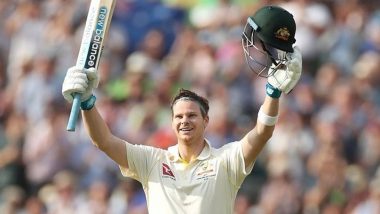 Steve Smith made one of the greatest comebacks in cricket history in the first match of Ashes 2019. In March 2018, the then Australian captain, alongside David Warner and Cameron Bancroft, faced a one-year ban for getting involved in a ball-tampering scandal. However, Smith made a comeback in whites in the first Test of Ashes 2019 and played not one but two stellar knocks. As Smith’s blitzes in Edgbaston complete one year, Rajasthan Royals - the franchise whom Smith will lead in IPL 2020 - took to their official Instagram account and recalled the match. “The perfect comeback does not exi-- #OTD last year, @steve_smith49 set the tone for the Ashes, scoring big 💯s in both innings,” wrote the Rajasthan-based franchise while sharing Smith’s celebration picture. Steve Smith Remembers His Stunning Test Comeback in Ashes 2019.

For the unversed, Australia were reeling at 122/8 while batting first and were on the verge of getting bundled out for a low score. However, Smith had different ideas as he made a remarkable comeback. He scored a solid century (144) and guided visitors to 284 in the first innings. People weren’t even done applauding Smith’s efforts and he played another stupendous knock. He scored 142 in the third innings of the game as the visitors won the match by 251 runs. Meanwhile, let’s look at how Rajasthan Royals celebrated the anniversary of Smith’s dual centuries. Rajasthan Royals Hilariously Trolls Kings XI Punjab Over IPL 2020 Announcements.

The perfect comeback does not exi-- #OTD last year, @steve_smith49 set the tone for the Ashes, scoring big 💯s in both innings. #RoyalsFamily

Smith next assignment will get underway in UAE as he’s set to lead RR in the 2020 edition of Indian Premier League (IPL) which is set to get underway on September 19. The franchise will expect Smith to shine in the marquee tournament too and guide them to their second title. Smith, however, will be supported by the likes of Ben Stokes, Jos Buttler and Jofra Archer who have enjoyed a great run in white-ball cricket in the past year.

(The above story first appeared on LatestLY on Aug 04, 2020 06:02 PM IST. For more news and updates on politics, world, sports, entertainment and lifestyle, log on to our website latestly.com).