Steve Smith Remembers His Stunning Test Comeback in Ashes 2019, Says ‘It’s Hard to Believe It Was a Year Ago’ (View Post) 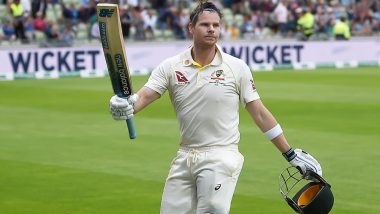 Ashes 2019 will go down as one of the biggest highlights of Steve Smith’s career as the veteran Australian batsman made his Test comeback in the series. In March 2018, the then Aussie skipper Smith, alongside David Warner and Cameron Bancroft, faced a one-year ban for getting involved in a ball-tampering scandal. However, he proved his worth again by scoring twin centuries in his comeback game against arch-rivals England in Birmingham. As Smith’s sensational comeback completed a year, the top-ranked Test batsman went down memory and remembered the special day. Smith called the day unforgettable and unbelievable too. IPL 2020: Steve Smith Praises Rajasthan Royals Team-Mate Ben Stokes.

“It’s hard to believe it was a year ago today that we started the Ashes. A day that I’ll never forget,” wrote Smith while sharing some of his pictures from the match on Instagram. The comment section of the post was filled in no time and fans also remembered how the right-handed batsman made mockery of the England bowlers and played not one but sensational knocks. Have a look.

It’s hard to believe it was a year ago today that we started the Ashes. A day that I’ll never forget 🏏 🇦🇺 🏴󠁧󠁢󠁥󠁮󠁧󠁿

Speaking of the game, Aussies were reduced to 122/8 while batting first at Edgbaston. The home team looked well placed on the driver’s seat. However, Smith had different ideas. He batted brilliantly with the tale and scored 144 runs and the visitors posted 284 while batting first.

In the second innings of the game, however, England posted 370 runs and took a significant 90-run lead. However, Smith shone again and registered his second hundred (142) of the game. Courtesy his brilliance, Australia declared at 487-7 and went on to win the game by 251 runs.

(The above story first appeared on LatestLY on Aug 02, 2020 04:36 PM IST. For more news and updates on politics, world, sports, entertainment and lifestyle, log on to our website latestly.com).