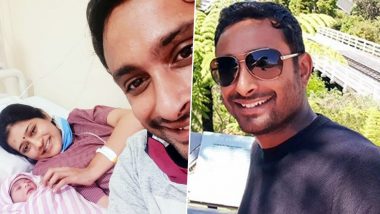 Team India and Chennai Super Kings batsman Ambati Rayudu and his wife Chennupalli Vidya welcomed their first child on Sunday. The couple were blessed with a baby girl on July 12. Rayudu’s IPL franchise CSK took to social media to confirm the news and also shared a lovely picture of the couple with their newborn. “Now the off-field lessons from the #DaddiesArmy shall all be put to use! #WhistlePodu,” CSK wrote in a tweet along with a picture of the Rayudu family. Little Kid Dancing With Joy and Celebrating After Favourite Football Team Scores a Goal Is Winning Hearts on the Internet (Watch Cute Video).

The picture was clicked by Rayudu hours after the couple welcomed their first child. His IPL and India teammate, Suresh Raina also congratulated the 34-year-old on the birth of his first child. “Heartiest congratulations @RayuduAmbati & Vidya on the birth of your daughter,” Raina wrote on Twitter. “Such a blessing! Cherish each & every moment with the little one & wishing you all lots of love & happiness!” MS Dhoni’s Daughter Ziva Meditating in Lawn Is Certainly the Cutest Picture You Will Find on the Internet Today!

Now the off-field lessons from the #DaddiesArmy shall all be put to use! #WhistlePodu 🦁💛 pic.twitter.com/JpA7drQ2TC

Heartiest congratulations @RayuduAmbati & Vidya on the birth of your daughter. Such a blessing! Cherish each & every moment with the little one & wishing you all lots of love & happiness! 👨‍👩‍👧💓

Rayudu, who has represented India in 55 ODIs and six T20I Matches also received congratulatory on messages from his fans, who flocked to Twitter to wish their favourite cricketer for the birth of the child and also pray for the mother and child’s safety. Rayudu and Vidya tied the knot in 2009.

Meanwhile, Rayudu last played for India in March 2019 and has not been picked for the national team since then. Heartbroken and disappointed after being neglected for the 2019 ICC Cricket World Cup despite being a regular member of the Indian team, Rayudu announced his decision to quit cricket but came out of retirement one month later and since then he has been representing Hyderabad in the domestic circuit.

(The above story first appeared on LatestLY on Jul 13, 2020 11:38 AM IST. For more news and updates on politics, world, sports, entertainment and lifestyle, log on to our website latestly.com).