The left-hander continued his good form in the series as he registered his fourth Test hundred, helping Australia revive their innings after England started brilliantly with the ball. Stuart Broad and Ollie Robinson got two wickets each for England with Mark Wood and Chris Woakes scalping one apiece. 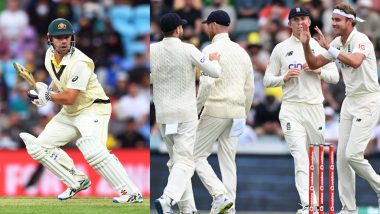 Australia were given a fresh lease of life on Day 1 of the fifth Test with Travis Head scoring a remarkable hundred after England started off brilliantly at the Blundstone Arena in Hobart. Rain stopped play prematurely after the contest turned out to be an exciting one. The visitors, who have already lost the series 0-3, bowled exceptionally well at the start of the day to reduce Australia to 12/3 at one stage. Stuart Broad was the wrecker-in-chief as he sent back Usman Khawaja and Marnus Labuschagne into the hut after Ollie Robinson had dismissed David Warner with only three runs on the board. He also got rid of Steve Smith to plunge Australia into deeper trouble at 83/4. Head then fought out a solid knock (101 off 113 balls) alongside Cameron Green (74) as Australia slowly stabilised their innings after a rocky start. Travis Head Scores Fourth Test Century During Australia vs England, 5th Ashes Test 2022

The left-hander, who was returning to the side after recovering from COVID-19, hit 12 fours in his knock but unfortunately, was dismissed the very next ball after his hundred. Green departed soon leaving Alex Carey (10*) and Mitchell Starc (0*) at the crease with Australia at 241/6 when rain caused play to stop on Day 1.

Let us take a look at some stat highlights of the game:

#This is also the first-ever series with two Day-Night Test matches. The previous D/N Test Match was played in Adelaide earlier in the series.

Carey and Starc would look to add some more runs, preferably taking the total close to 300 to give their bowlers a good chance of taking some sort of lead in the first innings.

(The above story first appeared on LatestLY on Jan 14, 2022 08:31 PM IST. For more news and updates on politics, world, sports, entertainment and lifestyle, log on to our website latestly.com).