"I think if Russell is now trying to build a team for the future, then I don't know what part Mashrafe will have to play in that. Perhaps now is his time, with all that's going on in the world, to move on," Gibson said. 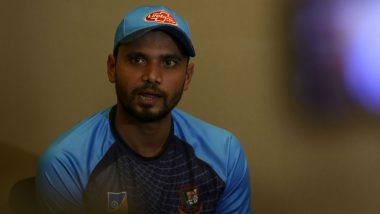 Dhaka, May 18: Ottis Gibson, Bangladesh's bowling coach, has urged Mashrafe Mortaza to bid adieu to international cricket as he doesn't see the 36-year-old fast bowler in the scheme of things for the 2023 World Cup slated to be played in India. Gibson, who joined Bangladesh in January this year, said that head coach Russell Domingo has to look at several younger bowlers to build a team in the next three years. "I think he (Mortaza) has had an outstanding international career," ESPNcricinfo quoted Gibson as telling Bengali daily Prothom Alo on Monday.

"He has done himself and his country proud. With the next World Cup in 2023, any international coach will now start to build a team. I am quite sure that's what Russell will be thinking. "So he would want to see players like young Hasan Mahmud, (Mohammad) Saifuddin, Shafiul (Islam) and Ebadot (Hossain.) We haven't seen Ebadot in white-ball cricket yet. There's Taskin (Ahmed) and Khaled (Ahmed) gets fit again. We have Hasan and (Mehedi Hasan) Rana. So there's a lot of young cricketers in the country," Gibson added. Mashrafe Mortaza Praises Mahmudullah, Likens Him to VVS Laxman.

Mortaza, had stepped down from captaincy during Bangladesh's last home series, against Zimbabwe in February. His retirement has been talked about for quite some time now however he hasn't made any official announcement

(The above story first appeared on LatestLY on May 18, 2020 11:57 PM IST. For more news and updates on politics, world, sports, entertainment and lifestyle, log on to our website latestly.com).