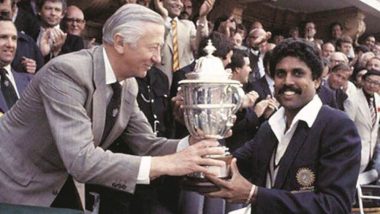 June 25, 1983, is one day that is written in golden letters in the history of the Indian cricket.  On this day, Kapil Dev and men lifted the World Cup for the first time by beating West Indies by 43 runs. Held at the Lord's Cricket Stadium, the pictures and videos of the match still remain fresh in the archives of our memories. Suresh Raina and many other cricketers have remembered the golden day, but now even our IPL franchises like Mumbai Indians, Rajasthan Royals, Chennai Super Kings have posted tweets about the same on their social media pages. 1983 Cricket World Cup: Suresh Raina, Mohammad Kaif and Other Indian Cricketer’s Remember Iconic Win on 37th Anniversary.

Kapil Dev's men were touted to the underdogs of the tournament and the world obviously did not even imagine of the Indian team carrying the coveted trophy back home. Even after years, the victory is still cherished by the fans and cricketers. The narration is so clear that it seems it was only yesterday that Kapil Dev won the World Cup. Now, let's have a look at the tweets by Chennai Super Kings, Rajasthan Royals, Chennai Super Kings and others.

#OnThisDay 37 years ago, the batch of 1983 changed Indian cricket forever. 🙌

"See honestly, the truth is, if one man had the belief that we could really win the 1983 World Cup... it was just one man... the great Kapil Dev Nikhanj, that's it!" - Kris Srikkanth

#OnThisDay in 1983, Kapil's Devils defended 183 to lift the Prudential World Cup at Lord's against the mighty West Indies 🇮🇳🏆

Can you name all members of the World Cup winning squad?#OneFamily @BCCI pic.twitter.com/8nJk5yWW1v

#OnThisDay in 1983, Kapil Dev and Co. gifted the nation a victory that was etched forever in every Indian cricket fan's heart ❤️

Relive #TeamIndia's historic World Cup final win along with the 1983 World Cup heroes themselves on @StarSportsIndia, today at 6:30 PM 📺 pic.twitter.com/pXDkaovdmR

1️⃣1️⃣ Legends#OnThisDay in 1️⃣9️⃣8️⃣3️⃣, India lifted the World Cup for the very first time after @therealkapildev 's team beat a formidable Windies side by 4️⃣3️⃣ runs in the final at Lord’s. 🏆🤩#PlayBold pic.twitter.com/syVmQ9zLzY

Talking about the game, West Indies had the toss in their favour and they elected to field. The West Indies team bundled out Team India on 183 runs. But it was Madan Lal, Balvinder Sandhu and others who snapped wickets for India and restricted West Indies on 140 runs.

(The above story first appeared on LatestLY on Jun 25, 2020 02:55 PM IST. For more news and updates on politics, world, sports, entertainment and lifestyle, log on to our website latestly.com).