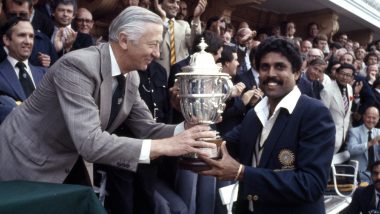 On this day (June 25, 1983), team India wrote their name in cricketing folklore as against all-odds they defeated West Indies in the finals of the 1983 Cricket World Cup to lift the country’s maiden world title. Kapil Dev’s men entered the tournament as underdogs but shocked the world in the end. On the 37th anniversary, several members of the Indian cricket fraternity have remembered the historic moment. India’s 1983 Cricket World Cup Win: 12 Trivia Facts About India vs West Indies Final.

This win is the most crucial moment in India’s cricketing history as it inspired a new generation of cricket fanatics as the country became obsessed with the sport. 37 years have passed since Kapil Dev lifted the iconic trophy at the Lord’s balcony in 1983 and several former and current Indian cricketers have reminisced the win. India’s 1983 World Cup Winning XI: Know What Members of Country’s First Cricket Champion Squad is Doing Today.

'One of the most important events in the History of Indian Cricket. This win inspired India's future generations to dream big! 37 years to this glory of #WorldCup1983,' Suresh Raina wrote on his social media.

'June 25, 1983: The iconic image of Kapil Dev holding the World Cup Trophy at Lord’s is a watershed moment in Indian cricket history. It changed cricket in India. This win inspired the next generation to achieve the impossible & dream BIG' tweeted Mohammad Kaif

June 25, 1983: The iconic image of Kapil Dev holding the World Cup Trophy at Lord’s is a watershed moment in Indian cricket history. It changed cricket in India. This win inspired the next generation to achieve the impossible & dream BIG pic.twitter.com/hoyEobpuwL

37 years today since the historic day at Lords when Kapil Paaji lifted the 1983 World Cup. As a 9 year old, it inspired me to dream big and enhanced my love for the game. Incredible day which inspired a whole generation. Thank you Team 83. pic.twitter.com/mjCKBmHpGk

On this day in 1983 @therealkapildev's team lifted the World Cup. The most important contribution of that victory was that it inspired a generation to take up cricket. It also put India on the map of World cricket. #WorldCup1983 #Kapildev #proud pic.twitter.com/LF6FN7S2Su

A day etched forever in history - June 25, 1983! #ReLIVE the story of our 1st World Cup win on its anniversary with a special #83WatchAlongOnStar with the champions @KrisSrikkanth, Madan Lal, Sandeep Patil & Sunil Gavaskar themselves!

Speaking of the final, India managed to put 183 runs on the board but it proved too much in the end for defending champions West Indies, as they lost the game by 43 runs and were bundled out for 140. Kapil Dev’s men were the underdogs in the final which is still remembered as one of the greatest upsets in sports history.

(The above story first appeared on LatestLY on Jun 25, 2020 12:09 PM IST. For more news and updates on politics, world, sports, entertainment and lifestyle, log on to our website latestly.com).