The defending champions fell to their ninth defeat in 13 games in what eventually turned out to be a one-sided contest. Gujarat, courtesy this win, will finish within the top two slots on the IPL 2022 points table. 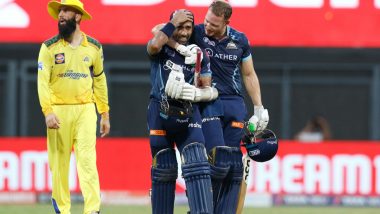 Gujarat Titans continued to have a pretty impressive season as they comfortably got the better of Chennai Super Kings at the Wankhede Stadium on May 15. With this result, Gujarat Titans secured a top-two finish on the IPL 2022 points table and also completed a league double over the defending champions. Meanwhile, Chennai Super Kings suffered their ninth loss of the season and they are likely to finish within the bottom two with just one game remaining. IPL 2022 Points Table Updated With NRR

Chasing a total as low as 134 would never be difficult for an in-form outfit like Gujarat Titans, who had Saha steer the chase. The veteran right-hander scored 67* off 47 deliveries to help his side score the runs with five balls remaining and guide them to their 10th win of the season in 13 games. For CSK, young Matheesha Pathirana, who made his debut, took two wickets for 24 runs in 3.1 overs. Pathirana, who is known as 'Baby Malinga' got off a splendid start to his IPL career with a wicket off his first ball, when he trapped Shubman Gill in front. He then went on to dismiss Gujarat skipper Hardik Pandya as well. Moeen Ali got the other wicket when he dismissed Matthew Wade.

Earlier, MS Dhoni won the toss and chose to bat first on a pitch where it was slightly difficult to score runs. Right from the beginning, Gujarat bowlers ensured that they had CSK under control and never did it look like they would let them get away. CSK rested the experienced duo of Ambati Rayudu and Robin Uthappa and gave an opportunity to young Narayan Jagadeesan in the middle-order. He did too well with 39 off 35 deliveries but CSK fell way short of what would have been a solid total. Gujarat's bowlers were extremely clinical--an example of that being the fact that they did not concede a single boundary in the last five overs of the match, something truly unheard of in T20 cricket. Barring, Jagadeesan, Ruturaj Gaikwad (53 off 49 deliveries) and Moeen Ali (21 off 17), no other CSK batter could make an impact.

#CSK hit no boundaries in the last five overs of the first innings,

Gujarat Titans would aim to maintain this momentum going into their final league game against Royal Challengers Bangalore on May 19. Chennai Super Kings on the other hand, would want to put an end to a disappointing season when they take on Rajasthan Royals on May 20.

(The above story first appeared on LatestLY on May 15, 2022 08:09 PM IST. For more news and updates on politics, world, sports, entertainment and lifestyle, log on to our website latestly.com).