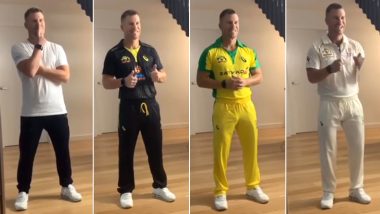 David Warner continues to bedazzle fans with his funny TikTok videos. The Australian opening batsman has been entertaining his fans and followers in these difficult times with extremely funny videos on TikTok. From grooving to popular Bollywood, Tamil and Telegu songs to home car racing and even banging himself on the head to create magic, Warner has pulled out all hats to make his fans smile. In his latest TikTok video, Warner goes through a journey of watching himself in different attires and chooses his favourite form of cricket. Warner watches himself dressed in different team Australia kits to select or decide his favourite form of cricket. David Warner Continues to Bedazzle Fans With His Hilarious and Cool Videos on TikTok.

In the short video clip, Warner can be seen scrolling through postures of him in different team Australia kits. From the T20I jersey to the ODIs one and also the Test one before he decides which is his favourite form of cricket and jumps in joy after selecting it. Here it is, my favourite form of cricket,” Warner captioned the TikTok video on his Instagram page. David Warner Raring to Get Back Onto the Cricket Field, Says ‘Sick of Shadow Batting in the Backyard’ (Watch TikTok Video).

Here it is, my favourite form of cricket. What do you think?? #cricket #fun #sport

Warner also asked his fans “What do you think??” is Warner’s favourite form of cricket. As he browses through postures of himself in different Team Australia Kits, Warner also groves to the popular rap song “Woah” by Krypto9095. The 33-year-old goes through the different kits according to the bit of the song.

Meanwhile, Warner would have captained the Sunrisers Hyderabad in the 2020 edition of the Indian Premier League (IPL) under normal circumstances. Warner, who captained SRH in the opening three seasons, was suspended from captaincy last season with Kane Williamson taking over the reins. But the Australian batsman was handed the responsibility and would have led the Hyderabad-based team in IPL 2020. The tournament was, however, cancelled due to the coronavirus Pandemic and the nationwide lockdown.

(The above story first appeared on LatestLY on May 27, 2020 02:00 PM IST. For more news and updates on politics, world, sports, entertainment and lifestyle, log on to our website latestly.com).